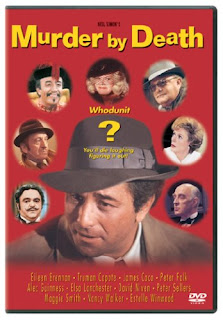 Millionaire Twain makes an unusual offer to five most famous detectives in the world - Sam Diamond, old Miss Marbles, fat Belgian gourmet Milo Perrier, Dick and Dora Charleston and inspector Wong - to come to his castle and solve a murder that is going to happen. The one who solves the case will get a million $. When they all arrive in the middle of the storm, actually two murders occur: the victims are Twain himself and his butler. Little by little, it is discovered all of the detectives were in some kind of a connection to him and that they had a motive, and when they all survive assassination attempts they all have a different explanation when they find Twain - alive. But none of them was right so they leave without the reward. Later on, Twain takes his mask off - he was actually the cook.

This fresh comedy from the first time director Robert Moore, otherwise an actor, shines with almost a friendly tone of comradeship. All of the 5 detectives from the story - Sam Diamond, Miss Marbles, Inspector Wong, Milo Perrier and Dick and Dora Charleston - are actually parodies of famous fictional detectives from movies or literature - Sam Spade, Miss Marple, Charlie Chan, Hercule Poirot and Nick and Nora Charles from the "Thin Man" series - and that fantastic premise where the crime solvers meet where they are and are not at the same time themselves, acting in their charismatic persona, is very fun and the film gains most of its energy from those interactions. Especially good is Peter Falk as the cynical Sam, who gives one of the most hilarious lines in the entire film when he looks at his woman dead seriously ("Don't you trust me, Sam?" - "Trust you? The last time I trusted a dame was in Paris in 1 9 4 0. She said she was going to get a bottle of vine. Two hours later, the Germans marched into France!"), but Peter Sellers is also in great shape as Inspector Wong. The whole film is childishly bung up, excellently intervened, perfectly set up in an isolated castle in the middle of the storm and rarely unfunny, but towards the end also slightly illogical, silly, forced in its spoofing of murder-mystery cliches or unnecessary in plot points and some underdeveloped characters. Among the golden scenes is the one where Wong feels the pulse of the corpse and says: "This man doesn't have a pulse. If his state doesn't change, he is dead!"; when Sam reveals he is actually actor Peter Falk or the idea that the whole room rotates. For some reason, "Murder by Death" was never regarded as significant, but it's nostalgic spoof of Agatha Christie's cliches is a little treat.