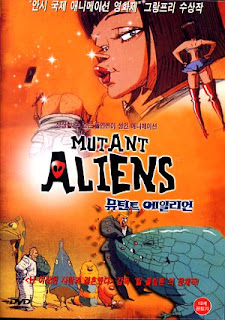 Astronaut Earl Jensen was sent to space, but his corrupt boss, Dr. Furbar, deliberately released his fuel supplies and left him stranded in space in order to gain sympathies from people all around the world and finance his Department of Space. 20 years later, Earl's daughter Josie is working in an observatory and still waiting for him. As she was one night having intercourse with her lover Darby, she spotted her dad's capsule return to Earth. He tells the world an invented story where he landed on a Planet populated with giant Nose aliens, only to later on reveal he spent all that time in a space station breeding mutant animals in order to take his revenge on Dr. Furbar. Earl is killed, but the mutant animals attack Dr. Furbar, causing him to hide in his ad-rocket where he dies.

"Mutant Aliens" is one of those films that are so weird that they immediately cause a mass of people to call them insane. It's one of those rare American adult animated features that don't hesitate to show violence and erotic, a cult grotesque without measure that will undoubtedly cause some viewers to run away screaming after seeing only five minutes of it, and the bizarre, frenzy animation alone will cause some to feel nauseous. Still, if one can get on the same frequency with Bill Plympton's wild style, one can find an interesting, satirical story about father's devotion to his daughter, corruption, greed, media manipulation and honesty. There's all kinds of crazy stuff in this film: in the opening shots, a TV reporter is announcing how the president was eaten by a giant nose. Josie, as a little girl, literally bites off the finger of the evil Dr. Furbar. An excited Darby gives a peek into his underpants, revealing a cannon instead of a penis. Undoubtedly, Plympton goes way overboard with his bizarreness, but there are enough redeeming features present. If anything, he shows he is at best when he can squeeze some cuteness out of the burlesquely exaggerated situations: in one of those cases, Josie is working late into the night in the observatory, when her lover Darby surprise visits her. They slowly start hugging and petting, and she is already disrobing her clothes, when she suddenly stops and tells him they "can't do this on her work place". Then she gets that doubt if she should do it or not, and, amusingly, a little nun version of herself appears on her left shoulder, advising her to "watch her reputation", while a prostitute version of herself appears on her right shoulder, advising her to "enjoy her life".