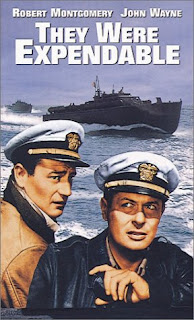 American military base on the Philippines, 1940s. Sargent John and his colleague "Rusty" Ryan can't convince the navy to replace the old, big battleships with fast, small patrol boats. After the news about the Japanese attack on Pearl Harbor their division is assigned to go to war in the Pacific, where the biggest victories are achieved with small boats. Wounded in his arm, Ryan ends up in a hospital where he falls in love with a nurse, but he soon has to leave her and return to the battle front. After loosing a battle, Ryan and John return to the USA.

The trip of the western veteran John Ford into the war film genre with the film "They Were Expendable" didn't end up particularly famous because his work somehow didn't seem "right". Watching "Expendable" seems more like a homework than a real treat: it has to be done and is will be rewarded, but it's tiresome. Still, as a whole, the movie definitely didn't fall into anachronism mostly because of avoiding the pathos and insisting on fresh humor. In the exposition, "Rusty" Ryan (a good performance by John Wayne) is joking how he only feels like a commander when he can command his soap in his bathtub. In the bar, during a special evening for the retirement of a soldier, the barmen announces to all the guests: "Quiet, please! The commander is going to hold a speech", while the commander slyly responds with: "I don't want to hold a speech. I just want to say something". In another scene, a soldier is talking to a cook and takes a spoon to try something from the boiling pot. "You call this a soup?" he asks, on which the cook replies with: "No, I call that hot water for washing the dirty laundry". The action sequences are unexciting while the clumsy romance between Ryan and the nurse could have been dropped out of the (overlong) story. Still, it's a realistic and well made achievement, one of the first to mention the issue of the Japanese attack on Pearl Harbor, miles away from partisan patriotic trash, while special effects and sound were nominated for an Oscar.