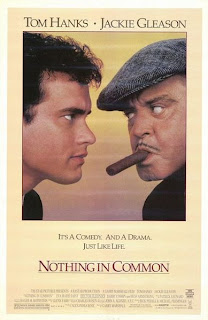 Just when he got his new promotion and his own office, David Basner, employed in an ad agency, is informed that his father, Max, divorced his wife after 34 years of marriage, apparently because of the fact that they stopped talking to each other. Now he has to take care of Max, who incidentally lost his job. David tries to make a relationship with Cheryl, but it falls apart, and also enters into a big fight with his dad when he finds out he cheated on his mom. But he soon discovers Max has diabetes and gangrene, delivering him to a hospital.

Tom Hanks made an interesting debut as a dramatic actor in the tragicomedy "Nothing In Common", but since the whole film is a soap opera the result in only half successful, proving that there's also an equal need for a screenplay to be engaging and stimulating. The movie is far from being dumb or shallow in his attempt to mix drama and comedy, but Garry Marshall's directing skills are rather uninspired; everything is overstretched, from jokes up to the endlessly long takes that try to copy the deep style from static directors like Allen, Antonioni, Tarkowsky and Kubrick. Unfortunately, it's only a solid film with a human message about the relationship between parents and their children, stopping right there. Jackie Gleason's final role is pretty good, while in one representative scene the boss of the hero says in a restaurant that he can "eat everything with a fork", then they talk about something else, and then David asks him at the end: "Can you even eat a soup with the fork?", proving to be rather semi-poignant. "Nothing In Common" is a moderately successful and acceptable achievement, but not as good as some other drama/comedy films like "Terms of Endearment" or "The Graduate".