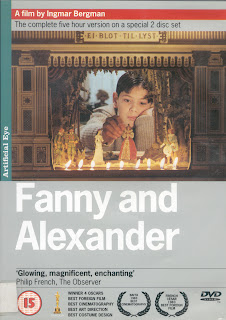 Sweden, early 20th Century. It's winter and little Fanny and her brother Alexander live in a rather wealthy family, occasionally playing with the servants. Their parents Emilie and Oscar raise them in Catholic education and organize a play with them involving the theme of the birth of Jesus Christ. But one day Oscar falls unconscious while he was playing the ghost in a play about Hamlet, and dies shortly after that. Emilia marries Edward, a bishop, but he turns out to be a violent tyrant - he locks Fanny and Alexander in his home and beats them for every lie. Emilia is pregnant and can't divorce him, but some old man manages to secretly free the children from their home and bring them at his place. From there, Alexander almost supernaturally causes a fire in Edward's home, which kills him. Everything returns back to normal.

Ingmar Bergman's last feature film released theatrically (he later on went to direct a few TV films, respectively) didn't disappoint his fans, but it also didn't particularly overwhelm them. "Fanny and Alexander" last for full 3 hours - they are not boring, but a lot of empty scenes seem unnecessary and overstretched - while the famous director lacks inspiration, passion and highlights in this particular case. The film is as depressive and static as his previous ones, and contains a solid concentration of quality: the best parts are actually humorous, like in the scene where an old gentleman is running in his underpants and farts (!) in order to entertain the children, a rather courageous idea that works in this case and was later on handled inferiorly in numerous vulgar comedies. In another scene, a madam responds to her husbands offense that she stinks with: "You're having sent hallucinations". Still, in the title it clearly states that the children, Fanny and Alexander, are the main characters, but in the first third of the story they are not even present, and even later on they seem rather pale and are being pushed in the background. It seems the move should have been called "Emilia and Oscar" instead. Still, the subtle handling of the theme of stepfather's abuse and surprising fantasy elements (a ghost in front of Alexander) give enough reasons for a recommendation.