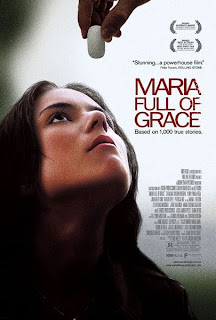 Colombia. Maria Alvarez is a 17-year old girl working a monotone and poorly payed job of removing thorns from roses at a flower plantation. She lives in a small house with her mom and her sister Blanca, who has a baby child. After breaking up with her boyfriend and fining out she is pregnant, she quits her job and decides to accept a well payed drug smuggler position to USA. She swallows 62 wrapped capsules full of drugs, taking a flight with her sister and friend Lucy. They get pass the custom, but Lucy can't defecate the capsules, so the two criminals kill her and slip her stomach open. Maria and Blanca run away and hide in the apartment of Lucy's sister. They get their money, but Maria decides to stay in the USA.

"Maria full of Grace" is quite simply a gut wrenching film. Like with most naturalistic films, the director Joshua Marston achieves the intriguing spark with realistic, simple, straight forward scenes, some of which do look important, some of which don't, making the whole story seem like a documentary, while actress Catalina Sandino Moreno delivered a powerful performance, for which she was even nominated for an Oscar. The film itself isn't flawless: it's easily watchable and slowly captivating, but basically a one note story about drug smuggling, not very suitable for frequent reruns, the beginning is overstretched and some religious symbols and story elements seem contrived. Still, even for those who think they saw everything in films and know every trick from movie makers about how to suck viewers into their movie world, there are 3 or 4 moments here present that are so authentically, emotionally devastating and upbringing, that will cause even those veterans to get on the edge of their seats and nervously watch every step the heroine Maria does, like little children. In one of them, Maria is practicing swallowing grapes in order to get use to swallowing capsules with drug she has to smuggle to the US, in her stomach. When the moment is finally there, she sits at a table while some men give her some pill that will slow down her digestion. Her boss, an old man, dips one large capsule in coffee and gives it to her. She puts it in her mouth, tries to swallow it, but she can't, so she spits it out. She tries again, and again, until she finally, barely manages to swallow it. With time, she swallow 62 capsules, while her boss displaces the capsules evenly through her stomach. This whole sequence, and the one where she takes a trip to the US, are simply unbelievably shocking, sad, tragic and intriguing. With objective means, the film avoided transforming into a sappy melodrama, but that precisely why it's so emotional - because it always stays neutral in observing the sad situation in which some people have to sacrifice everything in order to just live like decent beings.