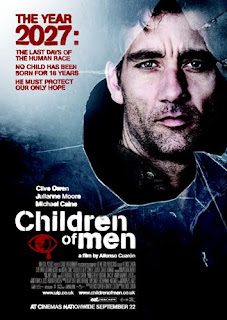 London, 2027. Man kind is dying out since a mysterious infertility infected every person on Planet. The last child was born 18 years ago. Theo is a middle aged employee in a firm who is quietly observing how the UK is fighting with a large number of refugees from other countries. One day his old friend, Julian, now leader of the pro-immigration activist group "Fishes", convinces him to get her a travel permit for a young African refugee Kee. They drive with the car but are ambushed and Julian is killed. Theo soon finds out the "Fishes" are protecting Kee because she is - pregnant. As he overhears how they just want to use her for their political goals, he runs away with her in order to bring her to the Human Project, a group of scientists searching for a cure for infertility. Kee brings birth to a baby and Theo manages to bring her to the sea in boat, just before he dies.

"Children of Men" is both an ironic and tragic allegory on the "infertility plague" of its time, when more and more women in the 1st world decided not to have any children at all, thereby displaying what an underrated, therapuetic role children have for older generations, are and how their absence leads to a domino effects of an end of civilization. It's one of those clever kind of Sci-Fi films that turn just one part from our life upside down and build a whole new world on it. The premise of the story is simple and chilling: it shows a world where every woman became infertile and people cannot have anymore kids. Already from the opening shots, where the TV news are announcing how the "youngest person on Earth", an 18-year old and last baby born at all, has been killed for not wanting to sign an autograph, does the story calmly display its array of potentials. In another scene the main hero, Theo, asks an artist why he keeps making paintings when "in 50 years there will be no one to see them". Man kind is aging while no new children are being born. On the other hand, some subplots in the story seem rather illogical and out of place; for instance, why would the UK be fighting against the mass of refugees when it's slowly having a shortage of people? And for that matter, why would the whole world slip into such drastic chaos if every country had the same situation of infertility? All those points are never explained and serve just as a plot device for forced messages about the thin line between civilisation and barbarism and the corruption of revolutionaries. It's a good film, with amazing long takes, but a little bit superficial in some areas, and the last third degenerates into an empty chase thriller and forgets a lot of it's intellectual points from the start. Still, it's message is intriguing: even despite all problems, cynicism and humiliation of life, birth and life are still a miracle, and without births there wouldn't be evil people, but also no good ones either.