How I Was Systematically Destroyed by an Idiot 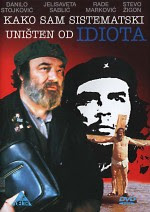 Belgrade in '68. Babi Papuška is a devoted hardcore Communist who is displaying his songs about Che Guevara during some Communist session. There he meets a Russian woman, Maria, who quickly leaves him after she lands in bed with his landlord. Constantly unemployed and fearsome Hypochonder, Babi goes to complain to some city superior about how he was ruined by a Capitalist boss who gave him, while he was young, too much work, causing him to loose a vertebra. Out of protest, Babi throws himself in front of a car and ends up in hospital, but accidentally wrongfully concludes that he is suffering from cancer. He goes on a spiritual journey, returning to his home town and experiencing a romance. There he accidentally puts the old archives on fire, but returns to Belgrade when he gets informed that a revolution is under way. In order to sacrifice himself, he jumps from a building and dies.

You have to hand it to the director Slobodan Šijan on one thing: in only 3 years he crossed from one extreme to another, from one of the masterworks of comedy "Who's That Singing over There?" to the weak, barely watchable tragicomedy "How I Was Systematically Destroyed by an Idiot", a confusing satire (?) about Communism that would have been flat out bad hadn't it contained the energetic, genius performance by comedian Danilo 'Bata' Stojković, in this occasion equipped with a "Marxist" beard. But even Stojković can't save the uninspired film: frankly, there is almost nothing present in the story. Hard core fans of Yugoslav films are the only ones that could enjoy in this, while the rest of the world would probably ignore it. Only here and there a good gag shows up, like when the hero Babi is exiting a toilet and doesn't miss out an opportunity to add: "When I was a kid, urine was regarded as the cleanest liquid that was used to wash out the wounds", and the story sometimes amusingly ridicules the nostalgic, blind devotion to any ideology, but mostly it's just simply a confusing mess without any kind of tight screenplay, equipped with bizarre situations (the scene where Babi is sleeping with a grotesquely overweight prostitute), an overstretched, desperate, lousy, boring excuse for any kind of satire.