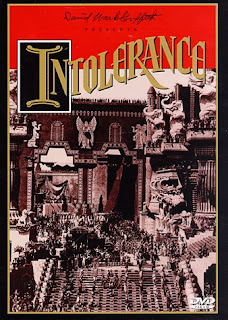 Four stories about intolerance; Babylon, 539 B. C. A young warrior has fallen in love with a Mountain girl, but she is not interested in him. She gets forcefully dragged to a market for arranged marriages, but prince Belshazzar, son of Nabonid who worships goddess Ishtar, sets her free. Another time, when the girl gets convicted, he again gives her freedom. Persian king Cyrus attacks Babylon, but loses. Still, a Babylonian priest who worshipped god Bel betrays the city and Cyrus conquers it...Judea, 30 A. D. Jesus Christ is spreading love, but pharisees don't like him. In the end, he gets crucified...France, 1572. The intolerance between Catholics and Huguenots results in the St. Bartholomew's Day massacre...USA, 1914. A factory gets shut down and a lot of workers lose their job. A husband of one woman gets wrongly accused of murder and sentenced to death. But the real woman who conducted the murder in the end admits her deed.

Griffith's "Intolerance", an epic with a quadruple story in one, is probably the most opulent and sheen spectacle of the silent movie era that has enough virtues to overshadow its somewhat overstretched running time of over 3 hours. The four (parallel running) stories that are all connected by a leitmotif of human intolerance that destroys love - symbolically present in the scene where a mother watches over her baby in the cradle - bitterly presents the devastation of man in the last two thousand years of history, but they are not all equally good; actually, two stories could have been removed for the sake of the better rhythm (among them definitely the weak third one that plays out in France).

By today's standards, Griffith's parallel cross-cutting of 4 different events from the tangle to the climax does not seem special, but in that time something like that was never before seen, except in Griffith's own earlier film "The Birth of a Nation", and he should be given credit for advancing the style of cinema and the montage technique. The "modern" story, set in 1914, has a lot of realistic and dark tones - i. e., one character, a middle aged woman, is noticing how she has become too old to join the young guests - and has a conventional style, while the Judea story is actually pretty nice, but underused. By far, the most fascinating story is the one that plays out in Babylon; the long sequence in which the Persian army is conducting a siege of the gigantic walls of the city (fire in the night, a movable tower that falls down, battles) is unbelievable, since equal care was taken for both the monumental set design, costumes and the characters, as well as the touching shot of the dead Mountain girl who is observed by two pigeons that carry a miniature carriage. Because of such poetry and wild opulence, this classic seems intriguing even today, and is rightfully considered the apex of Griffith's long and audacious film career.