He Who Sings Means No Harm 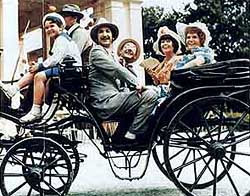 Zagreb. The 6 year old Perica Šafranek is writing a diary hoping it will serve as a valuable testament in 1,000 years. His mother Ana is often singing and daydreaming while her husband Franjo is rather primitive and clumsy. The family lives in a elite Zagreb suburb surrounded by friendly neighbours. One day, as Perica, Ana and her sister Mina were taking a picnic in Samobor, they met Mr Fulir. The classy bachelor starts flirting with Ana, taking her picture and promising to visit her. At first, Franjo doesn't suspect anything strange as Fulir is visiting their apartment, hoping he will match him up with Mina. When he finally realizes Fulir is seducing his wife, he starts a fight with him and goes to a local prostitute to make her jealous. In the end, Ana and Franjo manage to make up, arranging a wedding with Fulir and Mina.

"He Who Sings Means No Harm" is a gentle, nostalgic, charmingly outdated story from the everyday life of everyday people in Zagreb. The director Krešimir Golik is shaping the film in form of a simple fairy tale with amusing details; in the opening scenes, the viewers find out the 6-year old boy Perica is writing a diary, hoping it will be "read in a thousand years", while his neighbors are shown in funny fast motion shots reminiscent of the old silent comedies, from the chimney-sweeper up to the local prostitute in a improvised brothel, a black humored inside joke that stands out from the rest of the story. The main plot, revolving around the attempts of Mr. Fulir to seduce the married Ana, is executed fluently, but averagely, without many stand out, brilliant qualities, except for being nice. Also, despite being a comedy - with a few musical bits here and there - the film offers very sparse humor with a mild punchline, relaying more on its "postcards images" of Zagreb, although there are a few good jokes to be found, for instance in the scene in the bathing resort where Fulir is hiding from Ana's husband Franjo by placing newspapers on his head, or the one where the drunk Franjo is observing the moon and saying: "Look at the Mars! How big it is!" Filled with situations a lot of people can relate to, "He Who Sings Means No Harm" is a good comedy, but not the "best Croatian film of all time" like many Croatian critics like to claim. Because if it really is, the Croatian cinema would be in big trouble.