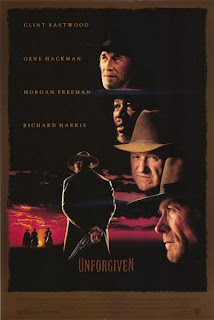 Wyoming, 1880. William Munny was once a criminal and masterful shooter, but now he is father of two kids, having a bad conscious about his past. His wife, who tought him to be moral, died years ago. In order to win a 1,000 $ reward, set for the heads of two aggressive men who mutilated the face of a prostitute for laughing at one of his small genitals, Munny rides together with his friends Ned and Schofield Kid to finish the job at the town Big Whiskey. But the two men are friends of the corrupt sheriff Bill, who catches and kills Ned. That makes Munny furious and he kills Bill and all of his friends in a saloon.

In some his macho roles in various action flicks, Clint Eastwood is almost as irritating as S. Segal, but with the shining anti-western "Unforgiven" he truly affirmed himself an ambitious author. That brilliant film, that won several awards, constantly surprises because it is breaking all those old cliches of the western genre, reminding even a little bit of Altman's "McCabe and Mrs. Miller"; among the unusual characters is the main hero, old William Munny, who was once a shooter and a criminal, but is now "retired", a reformed, widowed family man plagued by bad conscience about his wrong choices in past, and who now wants to avoid violence. One of the unusual scenes is the one where Ned asks Munny if he occasionally pays for prostitutes, upon which he replies that he doesn't because it's immoral. That prompts Ned to ask him again: "So...you're doing it with the hand?" Even other situations are untypical, from the fact that Munny became sick from a fever up to the scene where one cowboy asks his colleague: "Does a wound sting less during hot or cold weather?" Although unsentimental and at first slightly strange, this "late western" is at times pure poetry, subtly criticizing violence in portraying the old west as a primitive, depressed place where killing is a dirty job and nothing is idealised, where a lot of credit should be given to the amazing, refreshingly realistic and touching screenplay by the underrated David Webb Peoples. An astringent, realistic film, one of Eastwood's finest examples of a mature achievement, with a meticulous cast that helps it, among other the always excellent and competent performances by Morgan Freeman and Gene Hackman.

I think that film can proudly stand along the best of Ford, Leone and Peckinpah without a problem. I loved it!

Clint learned well from his years of doing the spaghetti western. Love Unforgiven. And how could you not love a line like- I've killed women and children. I've killed just about everything that walks or crawled at one time or another. And I'm here to kill you, Little Bill, for what you did to Ned.