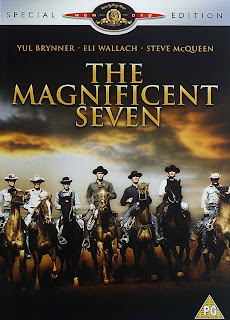 A Mexican village is constantly robbed by a gang of bandits led by Calvera. Since the villagers are fed up with that ritual, they decide to hire seven warriors to protect them. These are: Chris, Chico, Harry, Vin, Bernardo, Britt and Lee. The seven of them start training the residents, but are disappointed they hid all the women from them from fear. When Calvera shows up with his 40 bandits, he is attacked by Chris' men, who manage to kill a quarter of them. The seven leave the village for a raid, but when they return they find out Calvera's gang was let in by a coward resident. They are disarmed and sent home, but they surprisingly return and finish off the gang. In the end, only three of the seven survive.

Screenwriter William Roberts was obviously a big fan of Kurosawa's classic "The Seven Samurai" when he wrote the western remake "The Magnificent Seven": not only is the story nearly identical (except for playing out in the West), but he didn't even bother to change the number of the defenders in the title since there are no "Magnificent Six" or "Magnificent Eight", but exactly seven. Remakes are generally unnecessary, but this is one instance where the existence of this film is justified since Hollywood actually made everything right. The legendary opening musical score is something probably everyone heard off, even if they don't know its origins, while the clear narration, an ode to loyalty and honor - that is appreciated only after a confrontation with disloyalty and dishonorable people - and excellent performances by Yul Brynner and Steve McQueen are great virtues. The film is filled with great old school sequences: in one of them near the start, the main hero Chris observed a man who decided to pay for a dignified funeral on his own expense to a dead Indian who was lying for two hours on the street in some town. But he found resistance because people didn't want to bury an Indian in an all White graveyard - even though it's filled with bodies from criminals. After the undertaker refused to drive he carriage to the graveyard, Chris lost his patience and decided to drive the carriage himself, accompanied by Vin who decided to give him back up. It's an sleazy, but still powerful sequence because it establishes those two characters as two heroes who can't stand injustice. Filled with epic posture about heroism and amusing humor (the fast clapping scene), "The Magnificent Seven" is a magnificent western, despite an overstretched finale.