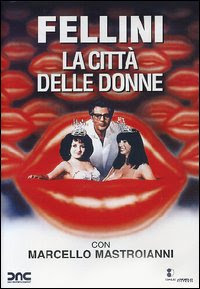 Snaporaz is traveling in a empty train. He is a typical macho man who is constantly in search for women. When one attractive woman exits the train and heads towards a nearby forest, Snaporaz follows her and comes to a hotel called Mira Mare. The place is filled with feminist women that hate men and scream: "Cellulite was invented by a man!" In order to save himself from the angry mob, he enters a elevator. A woman puts roller skates on his feet while some old lady drags him into the nature with her motorcycle. There he is persecuted by lesbians until he is saved by a man, Santini, the owner of a mansion that is celebrating the 10,000th intercourse with women. Snaporaz finds his wife Elena and a secret passage under his bed that leads him to a arena. There he jumps on a giant balloon in shape of a woman. He wakes up in train, realizing it was just a dream.

"City of Women" is, unfortunately, just another nicely directed nonsense that gets us served from the talented Federico Fellini when he is in some kind of "phase" where he drops any kind of logic and serves a surreal achievement, a typical director's ego trip that will annoy many and enchant few. Still, he is slightly more inspired then in some of his other weak films. The exposition seems like a parable that will teach the main protagonist, womanizing macho man Snaporaz, a lesson: namely, he enters a extremely radical feminist club in the middle of a forest, filled with angry women that shout: "Castration! Masturbation!" The club offers a caricature play where an actress is playing a housewife cooking, cleaning and feeding children until the point of exhaustion, only to get "taken" from behind by a lazy husband dressed as Frankenstein (!), while the screening room is showing a movie about a woman with 6 men/ lovers. The whole film is a giant, surreal dream where anything goes, but banal symbols about too high expectations of women and men from each other, grotesquely exaggerated feminism, irritating loose tone, wacky characters and a bunch of stupid episodes (slides, arena...) numb the "story" as a whole.