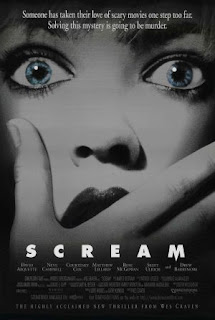 In Woodsboro, a teenage girl who answered an anonymous phone call, Casey, was stabbed and killed in her home one night. The small town is agitated, especially Sidney, whose mother was killed almost one year earlier under similar circumstances. The murders keep continuing, and a masked man with a black hood seems to be behind them. With the help of a sleazy TV reporter, Gale Weathers, Sidney manages to apprehend the killers: it was her boyfriend Billy and his friend Stuart. Billy also killed her mother, because she had an affair with his father, and thus caused his parents to separate. Luckily, Gale and Sidney escape and kill them.

During the time of its premiere, "Scream" caused quite a hype and sensationalism, yet after closely watching it even today, it seems to justify its cult reputation since screenwriter Kevin Williamson crafted a rather inventive meta-film take at the horror genre, demolishing its cliches, which at times almost seems as if it was directed by Godard - except that director Wes Craven refused to make it too artificial, thereby preserving its suspense and vitality. The murders are at times presented disappointingly ordinary (except Tatum's, Casey's and the sequence where the cameraman in the TV van observes the killer behind a lad on the couch on the screen, but then realizes he is watching a 30 seconds delay) and the last 15-20 minutes seem to have lost track, since they contain a fair share of sloppy, clumsy narrative without much motivation or conclusion of the bad guy, yet the sheer amount of inspired writing and innovative-auto ironic ideas is simply staggering (Sidney presenting Billy with her idea of their "PG-13 relationship", by exposing he bust in front of him; Sidney talking with the killer on the phone about why she dislikes horror movies: "It is always the same, some stupid killer stalking some big-breasted girl who can't act who is always running up the stairs when she should be running out the front door. It's insulting"; in the video store, Randy observes Billy and asks his friends: "If you were the prime suspect, would you be standing at the horror section?"), thereby making all the horrors after it in need for something fresher, and the intense pace never lets down. It may not reach the creative heights of such all-time horror comedies like "An American Werewolf in London" or "Evil Dead II", yet it is a remarkably fresh take at some plot concepts and ideas of the horror movies that became too-recycled after decades, and presents a clever meta-film touch: it is not the killer who is threatening the characters, it is the movie genre itself - and they know it, so they try to cut to the chase by outsmarting it with new ideas.