The Mysterious Castle in the Carpathians 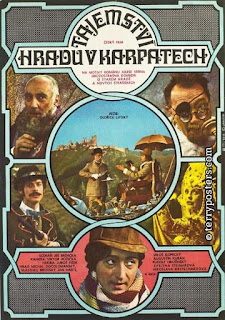 Carpathian hills, 1897. Count Teleke of Tölökö, a famous opera singer, enjoys the nature trip with his servant Ignac. When they find a man, Dezi, lying unconscious in the forest, they bring him back to his nearby village. It turns out he was investigating the mysterious castle on the hill, where strange things occur. The next night, Teleke and Dezi enter the castle and find it is inhabited by Baron Gerc and his mad scientist, Orfanik, who invented cameras and rockets. Teleke knows Gerc from before: Gerc was stalking Teleke's girlfriend and singer, Salsa Verde. When she had a heart attack, Gerc used Orfanik's inventions to conserve her dead body. When the army is about to storm the castle, Gerc blows the whole place up, but Teleke and Dezi manage to escape.

One of Oldrich Lipsky's final films, a comical adaptation of Jules Verne's novel "The Carpathian Castle", "The Mysterious Castle in the Carpathians" is a surreal and surprisingly inventive fantasy comedy that - despite its flaws - demonstrates that the director did not gain a cult reputation and stood out from the Czech cinema for nothing. The movie has a slow, lax opening act, but quickly gains momentum and delivers a weird, yet fun and original storyline with a substantial amount of crazy scenes, while its best moments are when it simply indulges in the typical 'Czech' oddball jokes (the servant carrying a giant chair on his back while accompanying Count Teleke while climbing on the hill; in the middle of the opera, a postman arrives with his bicycle on the stage to deliver an urgent telegram to singer Teleke; the bad guy spreads his long beard, revealing he was hiding a machine gun on his chest; Teleke singing with such a high-pitch voice it causes the secret camera lens and microphone hidden in the eye and ear of a painting to break...), especially involving scientist Orfanik who has a mechanical hand which can be converted to several functions, from a tool to a grabbing hook. The opulent locations are a special bonus, since the castle on the hill is aesthetically pleasant. The story may have a few 'rough edges', notably in the chaotic-clumsy finale, and some situations are not as funny as they could have been, yet Lipsky has a field day by joking with all the impossible high-tech inventions set in the 19th century, and does not even shy away from black comedy in the ending where Teleke and his friend are having a fight with the villain Gerc and his gang.