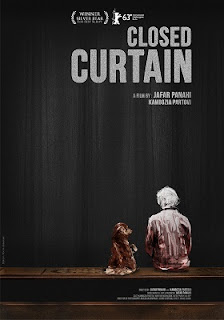 A writer arrives secretly at his mansion along the shores of the Caspian sea and closes all the curtains, hoping that the authorities will not find him while he is writing his new screenplay, together with his dog. He shaves his head so that nobody can recognize him. However, during a night, a girl, Melika, and her brother, find refuge in his mansion, after they were persecuted by the government for having a party at the beach. The brother leaves, while Melika stays and keeps asking questions about the writers life. At a certain point, director Jafar Panahi shows up and closes the curtains, and then has tea in the mansion, which is his. He sees Melika going into the sea.

Jafar Panahi's 7th feature length film was made during the phase when the director became subject to a "20 year ban on filmaking" by Iran's government, and as such it could not have remained immune to that injustice, nor have decided not to comment on the issue, even cryptically and symbolically. Panahi's own fate is mirrored in the main protagonist, the writer without a name, who is closing the curtains in his mansion and putting various black objects in order to have peace and privacy from the authorities - he finds himself in an absurd situation, where such a benign thing as writing a script became almost as illegal as drug trafficking. The scarce storyline is a little overstretched and may have been better as a short film, since not much could have been done out of the minimalistic concept in which the hero is hiding and never leaves his four walls, and the inclusion of a girl who questions his decision ("What truth about life can you find here?") is only of moderate enrichment of the viewing spectrum. The biggest impact arrives in the last third, when the director, Panahi, shows up randomly in the film itself, while the writer and the girl "disappear", in a baffling "metafilm" touch, almost as if he is showing that he "gave up" on directing the film, since the reality chooses to direct it itself - and his own destiny.