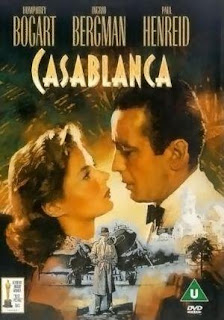 During the World War II, people fighting the Nazis and Vichy French want to flee to the US, and the best way to do so is to fly from the Casablanca airport in Northern Africa. Rick is a cynical American and owner of the popular "Rick's Cafe" club in that town, indifferent to both sides. But his life changes as his ex-girlfriend who broke his heart, Ilsa, arrives to his bar demanding letter of transit in his possession in order for her husband Victor to escape to US. Rick is in a quandary, but in the end gives Ilsa the papers and allows her and Victor to fly out of the country with the help of Captain Renault.

One of the most famous films of the 20th century, "Casablanca" is a timeless classic that inspired thousands of other films with its style and brilliant little details, a touching romance set in the backdrop of World War II that, unlike many modern loud and aggressive films, has such confidence in its "soft power"—the story and characters—that it is interesting and engaging even today despite Curtiz's understated and quiet movie making deprived of unecessary complications of fidling. With the simple, yet clever screenplay by the Epstein brothers, director Michael Curtiz managed to create a universally encompassing film, gripping and emotional without turning preachy, while Humphrey Bogart as the cynical hero Rick with a soul delivered the role of his career: the casino sequence alone where Rick softens up and helps a poor man by telling him to gamble and put all his money on number 22 and just leave it there, again and again, until the man is practically given a large amount of cash as a "gift", is enough to provide for what a wonderful person the hero is, regardless of how much he is hiding it behind his cynical persona.

However, there are still people who do not understand "Casablanca" or find it overrated. Yet the thing is so simple: just imagine if you were Rick—you find the love of your life, and then, all of a sudden, she simply disappears and breaks up with you without an explanation. That hits you so badly it drags you down and you become a cynical and pessimistic person without any hope in the future, especially since you don't know what happened. But years later, you meet your ex-love again, but this time she is in trouble and desperately begs you for help. What would you do? Take revenge or help her out? Almost everyone can identify with that sweet situation that Rick found himself in and which gives the story that special spark. One of the great virtues of this masterpiece are also the way it serves its juicy, funny dialogues, whether they are between Nazis and Rick ("Do you think we will conquer London?" - "Ask me when you get there"), Rick and Ilsa ("I still remember Paris. The Germans wore grey, you wore blue") or Renault and Ilsa ("If I were a woman, and I wouldn't be around, I would fall in love with Rick"), but also its calm rhythm, that probably wouldn't be dynamic enough for today's impatient audience.