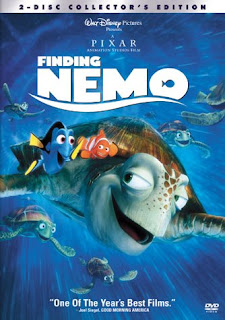 Marlin is a clownfish living somewhere in Pacific ocean and worrying too much for his little son Nemo ever since his wife was eaten by a barracuda. But on day Nemo gets captured by a diver who lives in Sydney. With a help of the blue fish called Dory, Marlin starts a long journey to find Nemo who meanwhile landed in an aquarium of a dentist. With the help of turtles and pelicans, Marlin and Dory reach Sydney but Nemo managed to escape all by himself through a toilet pipe and escape to the ocean. They reunite.

Despite critical acclaim and an Oscar for best animated film, it's hard to find something extraordinary in "Finding Nemo". After their excellent debut with "Toy Story", Pixar studio continued to constantly construct stories by the same old formula - to transport the daily routine of humans into a different world and to have the protagonists save a kidnapped character - thus resulting in "Finding Nemo" as a film that seems like "Toy Story 4", just with fishes. The movie is surprisingly unfunny and Pixar's obligational, loud, silly, childish tone of quirkiness and forced way of trying to gain sympathy has become a little bit irritating, obvious from hyper dynamic fish Dory through the unendurable, overkill sugary Australian turtle up to the fish in the aquarium who is afraid of viruses. The screenplay was also nominated for an Oscar, but the question is only what for. The search for the cute fish Nemo is overstretched and unconvincing (especially in the end in which the pelican flies into the dentist's room) with only a few interesting, clever moments (for instance, a bunch of fishes restructure to form a shape of a octopus and a ship) that abandon the Tex Avery cartoon caricature. "Finding Nemo" is a good standard film for kids, but still far behind the epitome of great achievements of classic animation, like Eichler's "Daria" or Disney's own "Snow White and the Seven Dwarfs".