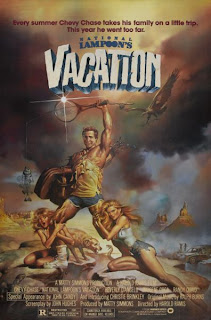 Clark W. Griswold persuades his wife Ellen and two children, Russ and Audrey, to take a vacation from Chicago to California to visit Wally World, a famous family fun park. But, instead of a plane, Clark insist they take the trip with a car, in order for the family come together during the long ride. Obviously, the 3,000 mile road trip won't pass by without complications: they get lost in the desert, when they visit their cousins in Kansas they are forced to take their old aunt Edna with them - who dies midway through, Clark gets a crush on some woman, they loose all their money and where ever they go, everyone is rude and uncivilised. When they finally reach their destination, the find out the park is closed, so Clark forces the security to let them in, but they don't get arrested.

After the giant success of comic road movie "LittIe Miss Sunshine", it's interesting to compare it with its forerunner, "National Lampoon's Vacation", a comedy with a similar plot and one of the most bizarre and inadequate movie posters ever. Although it was there first, "Vacation" loses the battle because it seems rather dated today with its heavy handed realisation and cheap humor, but it's nontheless still a turning point in the career of the director Harold Ramis since it is his first intrinsically good film that will make some viewers truly laugh out loud. The endless car journey of the Griswold family from Chicago to California contains a satirical touch, structure, family friendly emotions and even some sort of a dose of reality that confronts and fights against stupidity and cliches, but all that is still underdeveloped and can't be compared with real mastership. Ramis managed to make a good film out of the thin screenplay by John Hughes, but failed to lift his ambitions to the maximum. Chevy Chase is all right and reasonably sustained, while some gags range from cynical, like the one where the Griswolds forgot they had a dog tied to a leash to their car when they drove off - only after they were stopped by a police officer, to the grotesque, like the one where old aunt Edna dies in the middle of their journey in their car, and John Candy has an amusing little role as the security guard towards the end. "Vacation" is a nice little film, but only unambitious viewers will truly find it great.