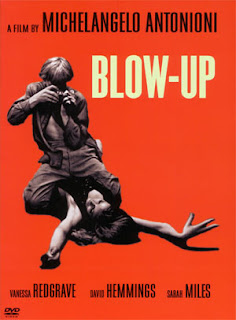 London. Thomas is a famous fashion photographer who is bored in life. The women he takes pictures of are going on his nerves so he spends most of his time driving in his car or shopping useless things at a store for antiques. One day, as he was taking photos for the book of his friend Ron, he accidentally takes one of a man and a woman in the park. The woman demands the photos, but he refuses. When she forcefully enters into his studio, he gives her the wrong film. But he then discovers that he accidentally captured the murder of the man on his photos in the park. He tries to publish it or contact someone, but nobody believes him and the corpse disappeared from the park.

"Blow-Up" is the biggest success in Michelangelo Antonioni's career: for the film, the director got his only Oscar nominations in life for best director and screenplay, the film was nominated for a Golden Globe (best foreign film) and 3 BAFTAs, and it won the Golden Palm at the Cannes film festival. Although more agile and "mainstream" than most of his achievements, this art-drama is still a typical Antonioni film with long, suggestive takes that create the impression of a "vacuum" of existence and avoid a tight plot, presenting once again a bored bourgeois (anti)hero, Thomas, who doesn't know what to do with his life. The most fascinating segment is the one where Thomas discovers in his studio that he accidentally caught a murder on his photo so he manically enlarges the parts of parts of the picture of a bush in the park, searching for details with his magnifying glass, and thus it's a pity the whole story didn't revolve around that passionate tangle, instead of showing Thomas' empty wanderings through the city most of the time. The finale with the pantomimes playing tennis without a tennis ball suggests Thomas only imagined the murder because his life was so empty he created something interesting in his head to give it some kind of deeper meaning, or that he lives in self deceiving society, which offers food for thought, but empty walks and boring minimalism reduce the film's intrigue.