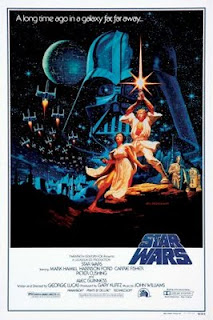 A long time ago, in a Galaxy far away...Rebels struggle against a Galactic dictatorship. Evil Darth Vader captures princess Leia in her spaceship, but she stored the secret information about the Empire's Death Star in droid C3PO, who escapes to a nearby desert planet, Tatooine, together with R2D2. There they get bought by Luke Skywalker who meets Jedi Obi-Wan. When Luke's family gets murdered by the storm troopers, he and Obi-Wan fly off into space in the spaceship of Han Solo and Chewbacca. They get to a giant space station, "Death Star", that threatens to destroy planets of the rebels against the Empire. Obi-Wan gets killed by Wader, but Luke and his friends destroy the "Death Star" and get rewarded by Leia.

"Star Wars", the originator of the famous Sci-Fi saga, became a real phenomenon: it sold over 178,000,000 tickets at the American box office and thus became not only the most commercial movie of the 70s, but also the 2nd highest grossing movie of the 20th century, second only to "Gone With the Wind", whereas it became a favorite film of many fans, while it was nominated for several prestigeous awards. Obviously, seeing those kind of revolutionary special and visual effects back in cinemas in 1977 was mind-blowing for many viewers, but sympathy does not always necessarily mean competence: if those special effects had been weak, the whole cult would have probably never been created since the story is unusual and stimulative, but mild, the characters stiff and one-dimensional (that's why only Harrison Ford became a star, because his cynical Han Solo who doesn't believe in the "Force" is one of the few really well developed protagonists), especially Chewbacca whose only purpose is to howl and follow the heroes; the dialogues average, while the the golden droid C-3PO and his companion R2D2 seem too much like a Disney comic sidekicks at times. One only has to compare the characters to such alive and vibrant protagonists from various animes or movies from Wilder and Hitchcock to realize how schematic they are.

Setting the story in its entirety in a mysterious foreign world, George Lucas created a few fascinating scenes, for instance the poetic sunset of the two suns on Tatooine, a space station so gigantic it can destroy planets with its laser or the moment where Luke discovers his home is burning, reminiscent of Ford's "The Searchers". Actually, the first 30 minutes are excellent, with neat little details that stimulate the imagination (the droid passes by a skeleton of a giant reptile on the desert planet), but once the "Death Star" segment starts, the mystical vibe dissolves and the whole story turns into a cartoonish action film. The concept of the "Force" and the Galactic Empire is underused and underdeveloped - ironically, it is much more gripping reading about the Empire on various web sites made 30 years after the film than it is explained in the sole film itself: how many plantes does it cover? How many inhabitants? What kind of a repression is there to drive the rebels against it? - while the dry adventure tone does not hold up the concentration of the viewers to the fullest. Lucas is a good director, but here without enough ingenuity - if "Star Wars" were directed by, lets say, the Coen brothers, Jeunet or Anno, it would have been done with much more spice. The pure example of the classic "Good vs. Evil" concept is here, as are many archetypes of fairy tales, while the music is magical, yet as a whole the film still seems standard and without spirit, because the authors should have taken more care of the story and the characters, instead of special effects which are today found in every big budget film.