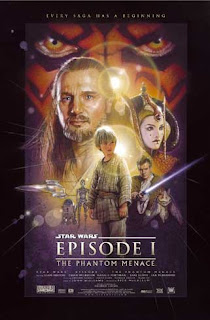 Planet Naboo is attacked by the Federation. Jedi Qui-Gon Jinn and Obi-Wan Kenobi save princess Amidala and land on desert planet Tatooine. They are accompanied by Jar-Jar Binks, a humanoid reptile, and droids R2D2 and C3PO. Qui-Gon finds a little boy, Annakin, and feels the power of Jedi in him. In order to win spare parts for their spaceship, Anakin wins in a race and goes with them. Planet Naboo is attacked by the evil emperor, thus the princess replaces the corrupt senators and begs the inhabitants to together defend their homeland. During the fight, Qui-Gon dies, but Obi-Wan kills the bad guy. The planet is saved, while Obi-Wan takes Anakin and decides to train him to become a Jedi.

After the famous "Star Wars" trilogy, director George Lucas didn't have any reason to make a sequel - since the original three films pretty much summed up the whole story - except to make a few quick bucks. If anything, he should have explored the underused theory of the Force and the system of the Galactic Federation, but he decided to rather give a backstory for Darth Vader, which could have worked, but didn't since the whole story in the three prequel films just lingers in every aspect. The first prequel, "The Phantom Menace", served it's purpose only as a commercial magnet, but with it's trashy creatures, aliens and sounds it almost brought into question the purpose of the whole saga. Lucas seems to be out of shape after abstaining from direction over 20 years, since the characters, scenes and events are written and filmed in a very standard, boring and ordinary way: no character has really any passion, any real ingenuity or something unique to add, except for the (weird) physical design of the comic sidekick alien Jar-Jar Binks. First off, the biggest problem lies in overstuffed special effects that bring the story almost to absurd chaos and ridiculous tone, while the characters are stiff, bland blobs of boredom, as well as the soap opera feel of the writing. Also, there are no revolutionary scenes that were not seen before. Still, one has to admit it is a variegated patchwork with a lot of imagination (giant fish; reptiles; a two-headed moderator who says a dumb-goofy line after an accident of a vehicle: "No matter from what part of the Galaxy you're from, that's got to hurt!") and the long race across the desert is good.