Fist of the North Star: The Legend of Raoh: Martyred Love Arc 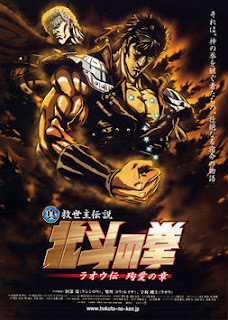 In the future, the whole world is devastated and the remaining living people follow the codex: "the survivial of the fittest". The three North Star brothers - Kenshiro, Toki and Raoh - all incredibly strong, are planning to fight with the invincible Souther, a dictator who enslaves children and terrorizes people. Kenshiro is joined by the old, blind Shuu, who saved his life when he sacrifised his eye sight in order to spare his life when he lost a battle as a kid. There is also Reina who admires Raoh and works for him. Souther seriously wounds Kenshiro, whose special martial arts powers don't seem to have an effect on him. Still, he recovers and, infuriated by the death of Shuu on the top of a pyramid, fights and kills Souther.

In the long history of endless "Fist of the North Star" sequels, remakes and variations, the authors of the famous icon decided to make a whole new set of new anime films, starting with "The Legend of Raoh: Martyred Love Arc". The animation, art and music is great, but everything else is, expectedly, a catastrophe. The whole moronic story revolving around the invincible hero Ken who fights with the bad guy Souther is one long cliche whose only purpose is to supply the wide audience with mindless fights, action and battles, or better said to give them a break from both the unexciting reality and intelligent art. As with the whole series, there are traces of hope and ideal rising from hopelessly dark, cataclistic world of evil, but these messages are arbitarily, presented in a cheap way, showing how violence is the only way to solve any kind of problem. It really seems the author of the film must have been a real misogynist masochist - every man is 10 foot tall, muscle bound, testosterone bruiser while every woman is puny and is only there to die or get injured. Some subplots of this misguided film are totally ridiculous: in the middle of a huge battle, Reina decends from a horse becuase she just happens to spot a little baby someone left on the battle ground, protecting it and getting hit by arrows in the back. Shuu is forced by the evil Souther to carry a giant, heavy block on thousands of steps to the top of the pyramid, even though his legs are bleeding from cuts caused by him. Even though the exploding heads were almost eliminated in this case from the standard "Fist of the North Star", the bad guys are all one dimensional 'plot devices' who are just there to provoke the good guys to fight them, and the amateurish tone is more than obvious.