Phantom of the Paradise 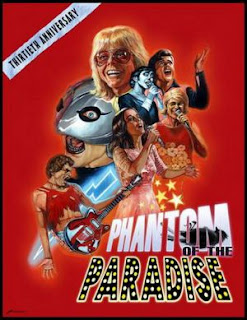 Naive music composer Winslow Leach gives his "Faust" cantata to manager Philibin, who steals it for his boss, the greedy record producer Swan. As months pass by, Winslow rebels, but Swan frames him and puts him in jail. Escaping, Winslow's head gets stuck in press plant and deformed, becoming the Phantom who terrorizes Swan's stage shows in his cocnert hall "Phantom" in order to take revenge. But Swan offers him a job as a music composer, and he signs the contract, hoping the charming girl Phoenix will get the part in his rock opera. But then he discovers that Swan is has made a pact with the Devil and now also has him in his clutches. He rebels and kills him during his wedding with Phoenix.

Cult fantasy musical satire "The Phantom of Paradise" is an interesting film that's a lot more easy to digest than some other abstract "ego trip" films. The first 30 minutes are excellent due to their amusing gags and playful nature, from the wonderfully naive composer Winslow, played by William Finley, the satirical logo of the "Death records" studio (the image of a dead blackbird lying on the ground) up to the brilliantly directed split screen showing two perspectives of the same event, a group of stage performers rehearsing on the stage until an explosion interrupts them, but the rest of the film simply isn't that fun or stimulative enough. It goes bizarre and over-the-top a lot of times, becoming a surreal new age version of the classic "The Phantom of the Opera", and Jessica Harper is simply irresistible as singer Phoenix, but in the end the movie falls into chaos and doesn't manage to lift itself up above anything more than a neat musical experiment from Brian De Palma's mind.

I adore this movie. I was so in love with Jessica Harper when I watched it. And the final "video-clip" is great as the images match the lyrics almost perfectly.

Jessica Harpa is the best virtue in this film.