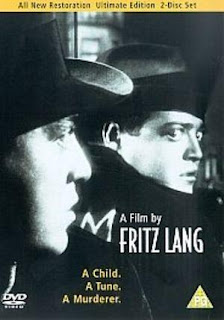 In Berlin a child murderer is keeping the city in panic, having already left 8 victims behind him, and despite all the warrants and the cautious eyes of the citizens, nobody can get into his trail. When the police starts raiding the cafes daily, it starts disrupting the jobs of "honest" criminals who decide to finally capture the child murderer themselves in order to finally have some peace again. They find out the murderer is Hans, but just as they are out to kill him, the police stops them and lets him have a fair trial.

Classic "M", the first sound film of the genius director Fritz Lang, is an unpretentious and simple masterpiece, and subsequently one the best films in cinema's history. Already the exposition alone is brilliant - a mother is nervously waiting for her child in the apartment, but it's playing on the street by throwing a ball into a pole that has a poster and a warrant for the child murderer (excellent Peter Lorre) on it, but right then the shadow of the murderer in person shows on the pole - while the meticulously masterful style that combines a fluid film language and a original visual style was executed up until the last minute, even subtly hinting the child murderer is actually a pedophile. Especially outstanding is the cynical subplot where "honest" criminals decide to capture the child murderer themselves because the daily police raids in cafes keep disrupting their job, an ironic twist of cosmic proportions that goes a full circle and creates honesty out of interest. Truly unbelievable is the scene where the underground boss is holding a speech about how they are working illegally only to finance their existence, while the child murder is an dishonest monster because he is doing it out of fun. "M" is a magnificent essay about the incompetence of the police, crime investigation and the fatality of criminals (the most frightening of them all, showing how the child murderer can't help himself but not to do those crimes), absolutely in no way becoming a propaganda film what so ever, showing a paranoia of a society in ruins.