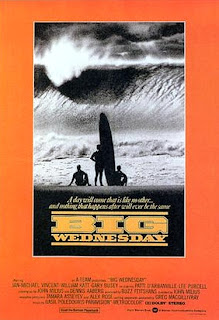 California, early '60s. Matt, Jack and Leroy are three teenagers who love surfing and partying at the beach. They take a trip to a Mexican city where Matt's girlfriend Sally announces she is pregnant. After the pier has been shut down, the three friends find jobs as life savers. Years later, they are trying to prevent becoming drafted by faking mental disorders, but Jack gets enlisted and goes to fight in the Vietnam war. Years later, Matt opened his own pool service while their "mentor" called Bear gets married. In '70s, they have all lost contact with each other and moved away, but they reunite once again to surf during the "Great Swell" in '74.

"Big Wednesday" is John Milius' nostalgic look at his youth in '60s and a gentle allegory about transience. It's a very unusual coming-of-age story at that, flawed and filled with many pointless and forced sequences (the whole Mexican trip, the big fight at the party...) but at the same time somehow heartbreaking, touching and true in it portrayal of three teenage protagonist slowly becoming old, accompanied by few wonderful songs like "Will You Love Me Tomorrow" by The Shirelles. Milius avoids idealising the lives of his three protagonists, always showing a dose of fresh naturalism and wild humor (in one scene, Leroy jokingly tries to see if he can fit into an oven, in another, he throws spaghetti on his colleagues in a restaurant), even going so far to show how youngsters avoided becoming drafted in the midst of the Vietnam war in the hilarious army recruit sequence where Leroy pretends to be a masochist, Jack to be blind (!), Matt to be invalid while some other guy even wrote he is gay. The final surfing sequence is overlong, but it symbolically shows that waves and surfing are the only things in the lives of the protagonists that are always constant, never changing, and that even the bad and confusing old times seem somehow nostalgic with time passing.
Grade:+++
Posted by Marin Mandir at 3:54 PM