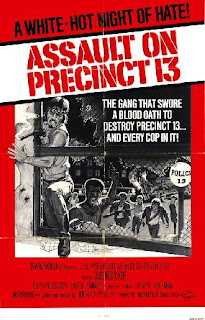 Anderson, Los Angeles. In an ambush, police kills 6 members of the Street Thunder gang who stole weapons. Black cop Bishop arrives to supervise the shut down of police precinct 13, followed by a bus that was transporting 3 convicts, stopping for a break. Meanwhile, Street Thunder gang kills an ice-cream man and a girl, causing her father to kill one member out of fury and hide in precinct 13. The gang starts a siege of the building, killing with their shots everyone except Bishop, assistant Leigh and the convicts Wilson and Welles. Although their ammunition is limited, the policeman and convicts cooperate together against the gang. When the gang enters the building, the trio manages to eliminate them with acid.

Virtuouso written and elaborated film, an essay about violence and a loose paraphrase of the western "Rio Bravo", showed real masterful skills from director John Carpenter. "Assault on Precinct 13" is his second film, and contrary to popular belief, not so violent and bloody as it is convinced in the fascinating idea about friendship and solidarity of two opposing sides (a cop, a convict) when faced with a common threat (a siege of the precinct of a wild gang). As a matter of fact, the friendship between the cop Bishop and the convict Wilson is practically optimistic and idealistic, but seems realistic when placed in the grim action story. In the end, it shows that even convicts have their good sides, and that under different circumstances they could have been friends with the cop, which is a refreshing twisting of the cliches. The now legendary ice-cream scene scene where a gang member shoots a little girl not even looking at her, can still break one heart with it's mix of sad, emotional subtext and violence. Carpenter created a brilliant cult film without any revolutionary style, using instead just simple classic narration presented in a different way.