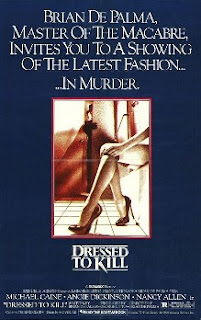 Kate is taking a shower while a man is touching her from behind - but it's just one of her fantasies since she is a middle aged woman bored by her marriage. Because of that frustration she often visits psychiatrist Dr. Elliott. In a museum, Kate meets a stranger and spends a passionate night with him, but when entering a elevator, she gets killed by a blond woman with a razor. Prostitute Liz saw the murder and contacted the police. The blond follows Liz in the subway, but she gets rescued by Peter, Kate's teenage son. They suspect the blond was Elliott's patient. But when Liz enters the office, she discovers the blond is actually Elliott himself, since he has a split personality. After Elliott gets arrested, Liz has nightmares about him.

Brian De Palma's controversial thriller "Dressed to Kill" is hailed by some and denounced by others. The main heroine which dies 40 minutes into the film, a murderer with a split personality, sudden plot twists, a (false) attack during the shower - these are all not accidental parallels with Hitchcock's "Psycho" since it's De Palma's stylish homage to the master of suspense. The plot itself is rather shaky, clumsy and campy in the second half, sometimes even unintentionally funny, but De Palma still directs it virtuoso at times, creating a refined structure and a great visual style when the film is revolving around long tracking shots of the camera - especially great is the editing of the scene where Peter uses a series of homemade time-lapse cameras attached to his bike to track patients from Elliott's office and De Palma's trademark spilt screen sequence where Liz and Dr. Elliott (Michael Caine, genius as usual) are at two different places but watching the same show on TV. The elements that turned out flawed are thin characters: the only truly well described character is the teenage inventor Peter, Dr. Elliott is good, while Liz and Kate are left rather underused. The other problematic thing is the director's bizarre obsession with an erotic tone in the story - the opening shot of Kate's fantasy where she is imagining herself in a shower getting "touched" by a man from behind seems rather like some sort of a soft porn. But non-the-less, "Dressed to Kill" is a multi layered, refreshing and original thriller that many jealous directors would have loved to have made themselves.