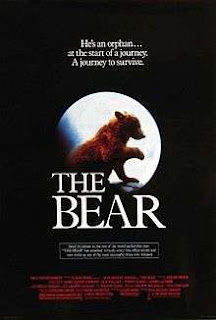 A mountain range. A bear mother and her cub are searching for honey on a hill. A land slide occurs and rocks fall and kill the mother bear. The bear cub, now alone, wonders through the meadow. It meets a wounded Grizzly and licks its wounds. Although initially reluctant, the Grizzly takes the cub as his own and teaches it how catch fish. A hunter who wounded the Grizzly, however, returns with dogs and is intent to kill the bear. Its dogs chase the two bears up a mountain, but they flee. One morning, as the hunter was washing under a waterfall, the Grizzly shows up and howls—but refuses to attack the hunter, and instead let's him leave. The hunter thus changes and decides to let the Grizzly live. As its starts to snow, the Grizzly and the cub enter and cave to go to sleep.

From time to time, a movie shows up where you really do not know how it was made. Wildlife drama "The Bear" is one of them: its protagonist is a bear cub, its mentor a grown up Grizzly bear, and thus director Jean-Jacques Annaud had to direct two bears throughout 80 % of the film. Except for two short dream sequences (which use stop motion to conjure up frogs and a bear), there are no visual effects in the film, all the animals in it are real, so stay faithful to its authentic feel. The task seems impossible—what prevented the bear to simply run away in the forest? How did the director tell the bears to climb up a mountain or jump in a river? How did the director tell the grown up bear to give a fish to a cub?—and yet, Annaud conquered that "impossible" and presented it for everyone to see and wonder. Raw, minimalistic, melancholic, emotional, calm, "The Bear" is indeed a wonder of a movie, a small jewel of the 80s cinema.  It abounds with astonishing real-life images: an orphaned bear cub wondering alone over a meadow, running after a frog near a lake; a puma cornering a bear cub, which stands on a branch over a river; a bear cub licking the wounds of a wounded Grizzly; the two bears chasing after a deer. The ending also offers a double transformation: not only that of the human hunter (Tcheky Karyo) who converts to an animal lover, but also that of a cub bear who finally falls asleep without nightmares. It is remarkable how simple of a movie "The Bear" is, and yet what a complex cavalcade of emotions and a catharsis it offers. It achieves so much from so little. Its two protagonists are animals—and yet, they are a synecdoche for the entire experience of harsh existence of life on Earth, their events covering such overarching themes as orphanage, loneliness, survival, the circle of life, compassion, friendship and growing up, which is universal, and applies even to humans. Maybe because it is telling us that all these traits are not just experiences in humans, but also in every living creature.