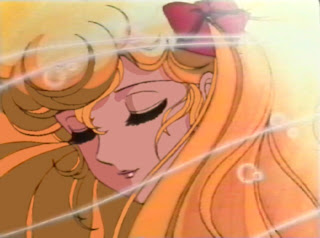 19th Century. Family Bateman is living in a farm somewhere in Australia's countryside. It consists of mother, father and their two little kids, Arthur and Abel. One night, the father finds a woman trapped by a fallen tree. She is a wife of an convict and dies, so he adopts her little baby blond girl and gives her the name Georgie. Equipped with a golden bracelet, Georgie was never told she is adopted. In an accident, when he was trying to save her from a river, the father was injured and died, and since then the mother always despised Georgie. But the situation will become even more complicated when the kids grow up into teenagers: Arthur and Abel's lives became very unpleasant since they both fell in love with Georgie, not regarding her as a sister, and ignoring other girls. But she falls in love with a British lord, Lowell. The mother finally looses her patience and tells Georgie she is not her daughter, rejecting her from her home. Georgie boards a ship to go to Lowell, and Arthur and Abel eventually follow. Lowell breaks his engagement with Elise for Georgie and gets disinherited. The couple lives in poor circumstances, so Georgie brings Lowell back to Elise, since he became sick and couldn't afford medicine. Georgie, Arthur and Abel eventually returned to Australian soil.

Incredibly emotional and refreshingly uncynical and serious Anime series from Japan deservedly enjoy cult status, and "Lady Georgie" is a small classic of shojo genre. Nobody can show such emotions on the characters's faces like the Anime authors (for instance, in the scene where Georgie is in her bed thinking about Lowell's eyes) while the story somehow manages to make the characters from the 19th Century seem close and real, to make the conflict between two brothers over the love for their foster sister exciting until the end, although the story ends rather openly, while the title heroine seems amazingly realistic, irresistibly cute, innocent, honest and introverted, where a crucial scene where she is naked (after being saved from drowning) only deepens her fragile state. Still, leaving the slightly loose structure aside, "Lady Georgie" suffers from unnecessarily childish pilot episodes from the childhood of the characters and from a weak ending. But as a whole the story is a dream for melancholic Anime fans, a beautiful "impossible" quadruple romance with a shining sense for touching drama.

All the highlights of this 45 episodes long series mostly play out during the teenage part of the story and feature amazing situations, sometimes even with a little touch of humor. For instance, in one of them, Abel saves a rich, spoiled girl, Becky, who was riding on a horse out of control. The scene where she looks at him with those eyes is magic. She later invites him, Arthur and Georgie to her home where she licks his wound on his arm, making him confused and leave. In another, Arthur accidentally spots Georgie in a cleavage on a window and becomes all red. She wants to wash the laundry and takes her "brother's" clothes off thinking that's normal, while he is even more ashamed to be in underwear in front of her. In a brilliant parallel continuation to this situation, Georgie meets Lowell, a young British Aristocrat, in a meadow, and jumps with her horse over him, making him fall in a creek. In an automatic house sitter reaction, she starts taking Lowell's clothes off in order to wash to them, but in the middle of the process, she realizes what she is doing and becomes all red, abruptly leaving the place. Even the most simple, irrelevant situations, gently portray the feeling of the confusing, nostalgic teenager hood, like in the scene where Georgie wears a fancy dress for the first time, observing herself on the reflection of the creek, noting how the cleavage of the dress is too big for her breasts. "Lady Georgie" is a humane and psycholigcally rich (melo)drama, capturing the weirdness of change, an animated feature so real, so gentle it will make you wonder if the real world is hiding in animation.

I watched this series as a child and now have borrowed some dvd's - the entier series, to be precise! I simply loved it!

Yes, I enjoyed it too. It has great nostalgia value.

Did you know the original comic book series had a far more tragic ending than the adapted animation? (i never watched the cartoon version, but i do know there is sort of a happy open ending.) Really sad, which makes a stronger conclusion for a story. i am from Taiwan, and i read the comic book series when i was in sixth grade. The story really tormented me for quite a few days... i am really, really surprised to see that this story have been translated into many different languages. The author also has another popular story, called "Candy Candy."

No, I actually don't know, I have never had the pleasure to read the manga, I just saw the anime version. Though I did read some comments on various forums where I heard about how the story ends in the manga.

I guess the story (at least the anime) was translated into various languages because it had some emotional spark even before the anime genre became hugely popular in Europe in the 90s. I also saw bits of the anime "Candy Candy", though it was not as engaging to me as this.

hey guys do you have a copy of the 45 episodes with english subs? i would able to donwload the epsidoes thru utorrent but no subtitle i can't understand, i really tried my best to put the downloadable subtitle to that video but to some episodes its not working please help guys i really want to watch this anime so bad, i'm done reading the manga of Lady georgie actually it's really so depressing that's why i want to to watch the anime which has a happy ending so that my heart don't need to feel so down anymore... please guys just give me a link where i could possibly watch this on net with english subs. ur help will be highly appreciated.thank you so much ( sorry for my bad english)

Unfortunately, this is today one of the most difficult animes to obtain. Hard to believe it had reruns regularly on German TV just some decade ago. Even some websites where you can watch animes, don't have Georgie. If I find something eventually, I will post it here.

hi i am really a fan of georgie and until now when im watchng it at youtube eventhough dont understand it,does anyone know where can i download it with subtitle. or dvds. i love this movie though i dont like how it ends. very lame. im inlove with the character and how the story went through. thanks.

hi nina nani. what happen to georgie on manga comic? whats the ending.
because on anime, its was very lame. they just return to australia.

I haven't read the manga, but several sources told me that Georgie got married to Abel and had a baby with him.

is candy candy continuation of georgie? or is it a diff story?
really they have a baby,wow thats great.thanks.

No, Candy Candy is a completely different anime (it came out in 1975, Georgie came out in 1982), it just has the same author, Yumiko Igarashi.

In manga version it ended very differently I guess the author was trying to make some twist to make the story longer. This what happened Georgie got pregnant by Abel but didn't get married because he was being executed for killing Irwin. She gave birth to a boy in England he named him Abel junior then later she and her son moved to Australia not knowing that Arthur was still alive and managing their farm.she was surprised to seeing him alive. Hahahah spoiler sorry. Better read manga and u will surely differentiate the ending of the story.was very different, a very dramatic ending and heart breaking. Too much shed of tears not lame as the anime version

there are only 21 episodes in the link you sent. How can I find remaining episodes with English subtitles?

That is currently unknown. This is the best that I managed to find online, as of today. I do not know if someone will upload the rest of the episodes of this anime series. The alternative is to buy the official DVDs on various e-commerce websites (the German and French versions are available, but I do not know if there are English versions of it).

I had seen the anime and then read the manga. The ending is sadder in the manga. I wanted georgie and lowell together so it got worse :(

I simply can,t forget this wonderful story of lady Georgie . When I'm still young I used to watch this and suddenly I have missed this animated series now I'm searching for it all over the net..

Yes, it was a really well made anime. I also remember it fondly. Luckily, the DVD box set is available and anyone can buy it online.

I do not know how long this channel is going to hold, but for anyone who speaks German, I found this: https://www.dailymotion.com/playlist/x58ewv

i watch the anime as a child and read the manga just now after 20 years... the manga version was sad but it will really moved your heart..

hi. . I havent had a good sleep when I start searching and watching on youtube the story of georgie. I think im really addicted watching it. im always thinking of each scene that tickles me. Its really wonderful and heart-touching movie. I never read the story in manga... but when I learned that abel and georgie had a baby I was so happy, but when abel been executed I think I will lose my mind of sadness.

Same here. I love the anime since I was a child and just read the Manga recently bec I was courious how it ends in that version. I'm so inlove with the characters. It is hearthbreaking that Georgie didn't end up with Abel (which I prefer) but Arthur is such a pure hearted guy who I also love for Georgie :) Superb story!!!

There is 21 episodes in YouTube with English Subs. The rest I found on Dailymotion but not English Sub. I jut read Manga before watching it so I can relate watching it in a diff language.

I felt the same. So addicted to the story I'm also caught between the love for Abel and Arthur both adorable and lovely in their own characters. Could I mary them both? Haha. It broke my heart into million pieces when Abel died. I can't imagine how hard it was for Georgie with their child and if it actually happened in real life. But ending up with Arthur is worthy enough bec he is a real gentle guy. I cried.

I guess that's what made it such a memorable anime, lovely characters and honest emotions. It seems people are still talking about it even today.

the night gone with bad filling about abel… is it awful end… but still this questions in my mind ; who Georgie love : abel or Lwel… ? I wish abel