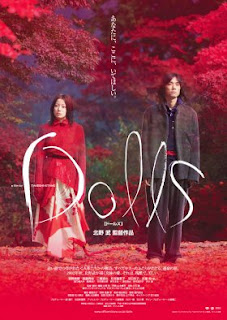 A puppet theater is conducting a play. Somewhere else, Matsumoto, a young guy, broke up with his girlfriend Sawako because his parents talked him into marrying the daughter of his boss, in order to succeed in job. When he hears Sawako tried to commit suicide, he leaves his wedding and drives to the hospital. Sawako's brain was damaged and she acts just like a little child. He escapes with her and ties her up with a red rope to himself, so that she can't get into trouble. They end up on a mountain resort, trip and fall, getting saved by a branch on a cliff...Nukui blinds himself after his idol Haruna was mutilated in a car accident...Hiro, an aging Yakuza, tries to meet the girlfriend from his young days.

"Dolls" is a beautiful, but uneven film. It starts in fascinating manner, with camera following a red rope being dragged through the grass, only to reveal two lovers tied one to another with it. The tragic love story between Matsumoto and Sawako is touching and intriguing in the first half, making one wonder why the director Takeshi Kitano decided to add two further stories to the film that seem unconnected and underdeveloped. The second short story about an aging yakuza is rather pointless, while the third about a devoted fan at least has some charm, if anything at least for the unbelievably cute and kitschy lyrics the imaginary pop singer Haruna is singing ("Girls are pretty when they are in love..."). "Dolls" are at moments virtuoso directed and have great little details (Sawako watching a dead butterfly on the ground, cleaners washing away the blood from the street, the surreal moment where the voice of a woman seems "off"), symbolically speaking about the far reaching consequences of one person being devoted to another, but in the second half it looses its spark and becomes so overstretched that every further scene just seems like an empty device to prolong the film's running time. Still, it's without doubt that Kitano is an interesting artist that mixes introverted and extroverted mood, showing this time even his gentle side.