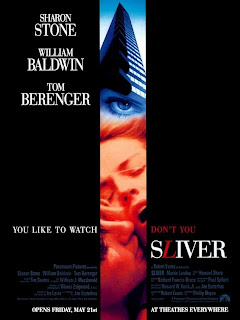 New York. Naomi, a blond girl, mysteriously fell from her apartment and died. Carly Norris, a 35-ear blond woman who just divorced, moves in into the same apartment as the new tenant. She meets two neighbors: Jack, a novel writer, and Zeke, the young owner of the building. Carly starts a passionate relationship with Zeke, all the while Jack keeps trying to seduce her. After new murder appear, Carly isn't sure anymore who of the two men might be the killer. She even finds out Zeke observes tenants through secret cameras hidden in every apartment. Accidentally, they kill Jack. Carly, still doubtful, plays a tape with Naomi murder, and spots it was really Jack. She then destroys the monitor room.

"Sliver" was proclaimed as "one of the worst films of the year" by a number of critics, but in reality it's actually a very solid and easily watchable film, a decent drama about loneliness with a few enjoyable scenes. One of it's biggest problems is actually the confusing story that doesn't know where it's going or what's it saying, equipped with sloppy dialogues and lame dramatic situations, and a bizarre end, that was re-shoot apparently after a negative test audience respond. But still, the film has potential, and with a little more care, it could have truly been excellent, or better said, it's a "sufficient film with a great film complex". Every now and then, some shots show the main heroine Carly (a solid Sharon Stone) being monitored on a number of black and white monitors from an unknown room, revealing the voyeuristic subtext, and bringing instant parallels to "The Truman Show". Ironically, "The Truman Show" is a better film, but it lacks a few crucial intimate moments, while "Sliver" is a weaker film, but it contains just those scenes that should have been borrowed to that film, like the scene where it is implied that Carly is masturbating while taking a bath, all the while while she is being observed on a monitor from someone. Also, the story has style and a nice mood, and some scenes are surprisingly esoteric, like the one where Carly is on top of Zeke, having intercourse with him, getting so overwhelmed by the magic moment that she gets tears on her eyes. When she enters the monitor room, she gets fascinated by hundreds of monitors showing every tenant in the building, and even observing a stepfather molesting her stepdaughter, later on encountering them in an elevator, but not having the courage to do anything. It's a very fascinating (sub)plot that was added to the film near the finale, and maybe it would have been better had it been better developed, instead of the standard who-dun-it thriller main plot.