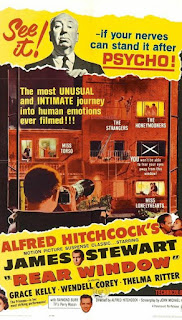 Photographer L.B. Jefferies broke his left leg and from there on spends the days in a wheelchair, bored and alone in his apartment. But the next week his orthopedic cast is finally going to get removed and his girlfriend Lisa visits him. One night he wakes up because he heard a scream and spots his neighbor Torwald through the window, having an argument with his wife. The next day, the wife is gone while Torwald is chopping something with an axe. He hires a detective, but he doesn't discover anything. Jefferies realizes that he killed her, but needs evidence. By luring Torwald outside, Jefferies' nurse examines the soil and Lisa his apartment. Torwald captures her and goes on to attack Jefferies, who flashes him with his flashbulbs. The police arrests Torwald, while Jefferies falls out of the window. Case solved, but now he has two broken legs.

"Rear Window" is one of the reason why Alfred Hitchcock is remembered even today, and why he should be more considered as the 'master of experiment' than the 'master of suspense', whereas he even announced how he considers it one of his favorite films. "Window" is quite frankly a subtle ode to voyeurism, a story set around the hero, Jefferies (very good James Stewart), who never leaves his room throughout the entire film (!) - except for a few scenes towards the end - from which he observes his neighbors through the window, which is why his perspective becomes the movie's only perspective, and in some other director's hands this could have turned out boring, even monotone, but in Hitchcock's hands it was transformed into a simple murder mystery that intrigues. He has sense for subtle details in the exposition in which he shows the orthopedic cast of the hero that has a signature stating: "Here lie the broken bones" or even the photo of the formula in the sole moment of the crash. Hitchcock again toys with the audience because he doesn't explicitly show the murder, but just how Jefferies saw something through the window at night, and the camera doesn't even leave the apartment when Lisa goes on to sneak in into the apartment of the suspicious neighbor, who is shown on the other window, right next to her. Because of such distanced approach, the story brings the viewers to want to engage in it more. It's a occasionally stiff and not that suspenseful, but well developed thriller. It was nominated for an Oscar (best director, screenplay, sound and cinematography), for a BAFTA (best film) while it won the New York Film Critics Circle Award (best actress Grace Kelly).