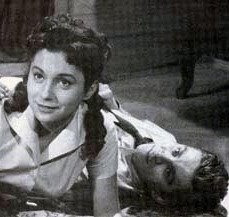 World War II. Zagreb during the time of Greater Croatia and the Ustasha-Nazi dictatorship. Ruth is a Jewish teenage girl who is good friends with the young Ivo and spends a lot of time playing monopoly in his home. But since the regime is prosecuting Jews more and more, Ivo's parents persuade Ivo to marry Ruth and lead a fake marriage in order to save her. Ivo is at first angry and defies his father, especially since his student friends are teasing him for rushing to marriage at such an early age and because he already has a girlfriend. Ruth sees that she is causing him great pain and runs away from their home, but he brings her back and falls in love with her. Still, she is eventually brought to a concentration camp. Ivo finds her and beats his old colleague Zvonko, now a prison guard, yet the couple dies when they try to cross the electrified fence.

In former Yugoslavia, it was common practice that directors from one republic would go for an assignment in another republic. One such example was in 1960 when Slovenian director France Stiglic went to Croatia to direct a story by Zora Dirnbach, which resulted in a small jewel, the excellent Holocaust drama "The Ninth Circle" which was nominated for several awards. This humane and touching drama is virtuoso directed and presents a larger issue, the genocide, through a small fate of one person, in this case the arranged marriage between the young Ivo and the Jewish girl Ruth (fantastic Dusica Zegarac). The first 80 minutes just show Ruth living in Zagreb during World War II, but it's enough to evocate the harsh reality of the political madness of that time and her fear for her life.

Stiglic leads the film with a sure hand, from bitter moments where the Nazi sympathizer Zvonko draws a "J" letter on Ivo's jacket up to sweet, touching scenes like the one where Ivo and Ruth jokingly use their two fingers to pretend to "walk" around the bredboard park, up until the point when Ivo's hand embraces Ruth's hand. Despite a humble story and small events without spectacle, Stiglic managed to craft an impressive film equipped with a masterful shot composition (just take the instance of the frog perspective of the camera during the tracking shot where Ruth is walking along side a tall wall). Only in the last 20 minutes does the story switch it's location to the concentration camp and go full circle. Precisely because of an intimate small approach, the film manages to be powerful since it shows how a sweet love between a couple can be so easily destroyed by an ideology of hate and blockade.


I love to read about your experiences! You write beautifully! I have enjoyed reading your articles. It is well written. It looks like you spend a large amount of time and effort in writing the blog. I am appreciating your effort. I offer to you to visit my websit midtown bailbonds