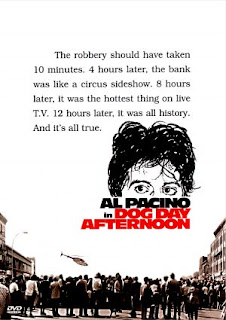 New York, '72. Clumsy Sonny Wortzik and his friend Sal storm into a bank in order to rob it. They planned to do their heist quickly, but it all goes wrong: they find only 1,000 $, one of their associates gives up and runs away and all of a sudden the police surrounds the building. Sonny takes bank employees as hostages and starts negotiating with police officer Moretti. They quickly discover the reason for their planned robbery: Sonny wanted to pay his gay friend a gender change operation. After a lot staling, it all ends bloody: the police shoots Sal and arrests Sonny.

Nominated for numerous awards, a classic of the 70s cinema, hyped "Dog Day Afternoon" is an unusual, brave, restless and derisory comical, and along with that it is really good. The reason for why some viewers tend to not understand it and react in a puzzled way is that, despite the fact that it was based on real events revolving around the failed bank robber John Wojtowitcz, "Afternoon" is such an untypical bank robber film that it needs adjusting to its style, and one of its unusual elements is the fact that it is so filled with humor that it seems like a comedy at times: in the exposition, Sonny, Sal and their friend enter a bank in order to rob it; but their friend suddenly changes his mind and leaves (!), the clumsy Sonny trips numerous times while they only find 1,000 $ in the safe. The bizarreness continues further (Sonny wanted to use the money to pay a transgender change operation for his gay lover) but they do not damage the believability of the story or the sophisticated sense for direction by Sidney Lumet while the characters all seem like real people which they were inspired by. By today's perspective, some elements do not hold up on repeated viewings: just like many 70s films, it fell into the trap of courageously presenting its brave social topic (in this case, the LGBT community), yet once that is unraveled, the show is stranded, left without any further surprises, and thus ends in a rather bland finale. This is also evident in the rather thin relationship between Sonny and Leon, as well as in the meagre character development of the hostages, who are all extras. The real Wojtowitcz complained how the film is only "30 % accurate of the events", yet due to the famous line "Attica" and Al Pacino's great performance, the virtues are simply hard to shake off: this bank robbery was simply the most unusual "coming out" story of its time.