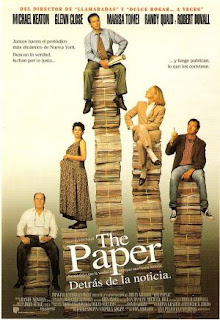 The story follows 24 hours in life of Henry Hackett, editor of the unsuccessful newspaper "New York Sun". His biggest assignment is to discover details that would prove two Black people, convicted of murder, are actually innocent. There are also unnecessary arguments with his boss Bernie, stubborn Alicia and wife Martha who is expecting to give birth any moment. The publishes a sensational news, but everything just remains the same as always.

Mild "The Paper" definitely doesn't have that satirical edge and sharpness that would be expected at such stories, which is why compared to the excellent "Parenthoood" it seems that the ambitions of director Ron Howard deflated, but compared to some of his mediocre mainstream films, this is still a good result. There is not enough humor here to ignite the story - except in some notable exceptions, like when editor Henry (good Michael Keaton) observes the map of Florida and cynically comments how it looks like a "hanging penis" - yet the story is so madly obsessed and focused on details that it's sometimes a real treat to watch all those small events in a newspaper office revolving more around politics than objective journalism. One has to praise the authors for managing to make the film look simple and keep it's oversight, while an additional relationship with quality was made with a choice of great actors who made their roles better than they were written, especially Marisa Tomei as the pregnant Martha.