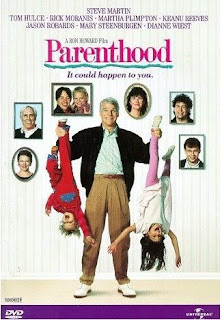 Gil Buckman is an average family man married to Karen, father of three children. Their oldest child, Kevin, has emotional problems and may have to go to special class, while their youngest, Justin, isn't especially intelligent. Gil's sister Helen is divorced and has to take care of her children alone, the lonely Garry and the teenage Julie who is in love with the irresponsible Tod. Gil's other sister Susan is married to a husband who only thinks about making their little daughter more intelligent. Gil's brother Larry gambles a lot and owes a huge debt, but rather decides to leave than to work for his father. Karen becomes pregnant and gives birth to a girl.

Excellent tragicomedy that speaks about family problems from the perspective of parents manages to be funny and emotional at the same time, to show both the good and the bad sides of family life, in the end turning into one of the best movies directed by Ron Howard. Even though it may seem that Howard just leaned back and let the story go whatever way it wants, "Parenthood" is a very effective slice of life that achieves everything precisely due to its simplicity and wonderful screenplay: the whole story is just one vignette after another, but they connect well and the viewers can relate to them easily. In the end, even big things are made out of small details. From the 'black sheep' in the family, a rebellious teenage daughter, arguments with kids and parents up to trials from relatives, the film shows a whole array of realistic relationships, arranging them in a calm and settled mood, only making a few mistakes here and there, while Steve Martin gave probably one of his 2-3 best performances of his career as Gil and was thus rightfully nominated for a Golden Globe as best actor in a musical or comedy. One of the funniest moments is when Gil dresses up as a Cowboy to fill in for Cowboy Dan for the birthday party of his kid, slyly announcing: "My name is Gil. Like Guil-lotine", even though the kids all miss the joke. And the fantasy beginning where Gil is a child, and says to an Usher that he is only his memory of childhood, is pure genius.