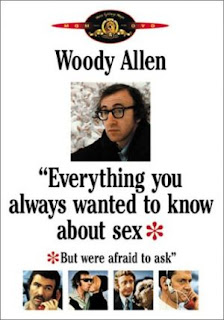 Several stories about people and sex. Bunnies. Medieval times: a fool fails to make the king laugh at a feast, but gets attracted to the queen. He gets an aphrodisiac and puts it in the drink, becoming irresistible to her, but gets caught by the king who cuts his head off... Dr. Ross gets a strange patient, Armenian Miloš who begs him to convince a sheep to love him again. But even Ross gets fascinated by the sheep... An Italian director finds out his wife can only reach orgasm in public... Sam never told his wife he likes to dress up in women's clothes... The show "What's My Perversion?" is a hit... Victor and some journalist girl destroy the castle of a crazy scientist and catch a 30 ft tall breast into a bra... Neurons are under enormous pressure to monitor the complicated process of ejaculation.

Anarchically hilarious comedy by Woody Allen, made in his earlier phase while he still didn't shoot serious movies, is his most absurd achievement that has sarcasm of such proportions which not even "Simpson's" or "South Park" authors would be ashamed off. Although the theme is undoubtedly intercourse, the movie is still suitable for audience aged 14 or up since it's not pornographic - in fact, it has no explicit scene of human intercourse - but a comedy. And it's pretty funny - in the first episode, Allen plays a fool in medieval times, with a small puppet of himself, telling a joke to a fat king: "The king is obviously the strongest man around here. I heard he crossed the ocean with his width". There's also the unpretentious gag in the form of a TV show called "What's My Perversion?" in which the guests can't discover that some guy is an exhibitionist, the sly parody of an Italian director, maybe Antonioni, whose wife can only reach orgasm in public is a riot, while Burt Reynolds appears in finale, playing a cell in brain that fights against impotency ("Brain to genitals: work!"). Some episodes are stupid and silly, but Allen shows his talent even on weird terrain: who would have thought that such a "tame", "boring" and "geeky" man can come up with such a tricky cult comedy?