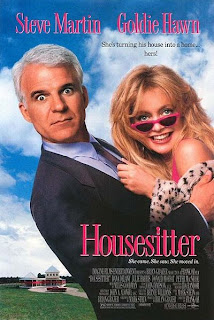 Architect Newton Davis built the house of his dreams and proposes his fiance Becky, but she refuses. Three months later Davis, by following a friend to a bar, meets waitress Gwen who claims to be Hungarian, even though she isn't. Even though she constantly lies to Davis, he still likes her and they spend the night together. The next morning he is gone. But Gwen discovers where he lives and moves into his house, telling everyone they are married. When Davis returns and finds out, he is infuriated at first, but agrees to play the game in order to make Becky jealous and make her return to him. Those lies also have advantages: the parents praise him, the boss promotes him. During a party, Gwen hires actors to play her parents, but suddenly feels disgusted and leaves. Davis follows her and truly falls in love with her, while she admits her name is actually Jessica.

Good and sympathetic low key comedy "HouseSitter" offers the recognizable handwriting by Frank Oz: unusual plots, absurd humor and burlesque scenes. Still, this is one of his weaker attempts due to stiff characters, routine execution and overall mild tone. Also, it seems some moments are too abstract for viewers to enjoy them if they are not Steve Martin fans, yet the story has it's moments: for instance, Goldie Hawn's character of Gwen, a woman who lies non stop, ignites a few good gags like the one where she starts telling wild fairy tales about her wedding with Davis in a hospital, even adding such shrill "details" like that he took the bandage instead of the veil from her face when he kissed her. Davis goes to see his boss and finds Gwen there who already persuaded him that he fought with her father on the Pacific. Thus he tells her at one point: "Why don't you tell truth for a change, as a joke".