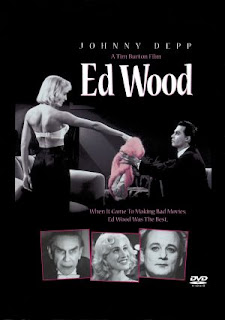 1 9 5 0s. Ed Wood is a young and naive aspiring filmmaker. His first play gets disastrous reviews and he is stuck doing a small job in a studio, but he never gives up hope. When he meets his idol on the street, the old Bela Lugosi, he becomes his friend and manages to assure the financing for his first film, the transvestite drama "Glen or Glenda". Producer Weiss hates it so much he decides never to work with Ed again. In order to fund his new films, "The Bride of the Monster", Ed borrows the money from a butcher. His wife Dolores Fuller leaves him because he won't stop wearing women's clothes, but he finds a new one, Kathy O'Hara. After Lugosi dies, Ed uses his stock footage and incorporates it into his new film "Plan 9 From Outer Space", hiring the wrestler Tor Johnson and gay Bunny Breckinridge to play the parts. It's a colossal flop and gets named "the worst movie of all time".

You have to hand it to Tim Burton: he made a biopic about 'the worst director of all time' and managed to make one of his best films out of it. "Ed Wood" is, for Burton, a surprisingly normal, calm and measured humorous drama without bizarre gimmicks, shot in black and white, revolving around a tragic, misunderstood outsider. Many directors wouldn't have dared to even touch such a tricky subject from fear of a stigma, especially since the movie clearly shows inserts from Wood's infamous trash films, fearing such 'anti-quality' might contaminate even the film itself, but Burton and screenwriters Alexander and Karaszewski managed to clearly distinguish them with an easy hand, as if they didn't want to judge and rate an artist solely for his talent, but for his pure enthusiasm, thereby making an ode to independent movie makers everywhere.

Wood was truly a fascinating character: he wore women's underwear in World War II even though he wasn't gay, adored trash stories and was full of naive ideas, like when he looked at the old, random reel films in the studio and naively said: "Why I could make a whole film out of this stock footage! It would start with explosions! Nobody knows what they are but they are upsetting the buffaloes, so the army is called to investigate!" Johhny Depp plays him absolutely irresistibly cute, talking with a blissful smile like a little kid, and that's why it is so heart breaking to watch how he falls deeper and deeper because he does not understand the cinema language, even though he never gives up hope and always gives his best. A few inappropriate profanities, some cheap gags, repetitiveness and the slightly overstretched running time bring the film down, but it is still very well made thanks to ironic moments (in one of them, Wood's crew doesn't have enough money so they break into a film studio and steal a puppet of an octopus for their film!) while Martin Landau is great as the forgotten Bela Lugosi, for which he won an Oscar and a Golden Globe as best supporting actor.