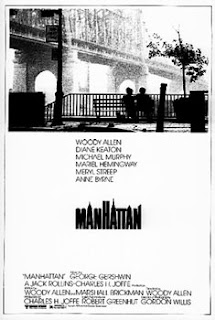 Isaac talks about how he loves his New York no matter what everyone else says. He is an author of TV comedy shows, but quits due to differences with his colleagues, telling them: "Your humor is environmental pollution". He is divorced from his wife Jill who became a lesbian and kept their son, thus starting a relationship with the 17-year old Tracy. But then he meets Mary and falls so deeply in love with her that he breaks up with Tracy. Isaac is also very scared, especially when he hears loud thunder ("I think I just heard a house explode"), but still returns to Tracy.

The high reputation of his genius romantic comedy "Annie HaII" resulted with an even bigger commercial success for Woody Allen with "Manhattan" that grossed almost 40 million $ at the US box office, getting a nomination for several awards. This wonderful film is a beautiful ode to New York, dressed up in enchanting black and white cinematography, even though the first 10 minutes are rather boring and derivative. Even though some of Allen's mannerisms are annoying at moments, he can really write wonderfully, creating here a few surreal romantic scenes (the walk of him and Mary where they confess their feelings for each other in planetarium, with images of Saturn and stars in the background), yet even his gags are in top notch, mostly is the form of dialogues, like when Isaac meets a strange group of people at a party ("You interrupted us, we were just talking about orgasms. I'm currently planing a movie about a man who satisfies women so much that it causes them to die from pleasure!"), says: "I think people should mate for life, like pigeons or Catholics" or the tragicomic, exquisite moment where he breaks up with his 17-yea old girlfriend Tracy and comforts her by telling: "Don't look at me like a child from Bolivia who begs for help". Especially good and inspiring are the scenes where he is grouchy, revengefully cynical towards his ex-wife Jill, even wearing in one scene a shirt that states: "Divorced father whose stupid wife writes books about him".