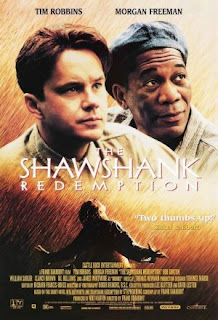 In '47, the respectful Andy Dufresne gets charged for killing his wife and her lover, and despite circumstantial evidence, gets sentenced to life. He arrives at the notorious Shawshank prison and is shocked by the sheer brutality of the guards, who kill a convict one night. Andy makes friends with the Black Red who gets a rock hammer for him. But then he decides to make even more friends: since he was a banker, he advises the prison Captain Hadley how to transmit up to 60.000 $ without paying taxes and since the Warden Norton loves the Bible, he starts quoting Psalms. Slowly, Andy starts enjoying protection: when the convict Boggs attacks him, the guard beats him up to blood, whereas he even gets an easy job in the library. But when the Warden discovers Andy is indeed innocent since the real killer of his wife lands in the prison, he decides not to let him go since he earns a lot of illegal money due to his assistance. In '66 Andy digs out a tunnel and escapes, taking all the money from the fund and accusing the head guard, who gets arrested, and the Warden, who commits suicide. Red gets released.

Tied with "The Shawshank Redemption", there lies a fascinating trivia: with an average grade of an incredible 9.2/10, it ranks as the 2nd best movie of all time on IMDb's top 250 list. That's undeniably exaggerated and overhyped, but it really is an excellent film, an impressive, serious prison drama nominated for 7 Oscars and 2 Golden Globes that contains a positive plot twist at the end that needs to be remembered. The violent and depressive beginning is very gruelling, and many viewers will wrongly assume the whole story is going to be like that all the time, but the film becomes very interesting when the main protagonist Andy boldly starts making friends with the brutal prison guard and the Warden, helping them earn money: from there on, they start protecting him and giving him a special place in the prison, making the story incredibly multi layered. One of the themes of the film is to show the fascinating way the hero manages to settle down and manage in that system, landing, like a cat, always on his feet. Some would think he is a weakling, but it really demands a lot of character to make a friend out of an enemy. The other theme is his uncorrupted nature even in such harsh place like the prison, thus making the allegorical ending with a sweet twist really smashing in this virtuoso written and intelligent film. Despite some flaws, there are also so many powerful little moments present throughout, from the tragic supporting character Brooks who gets released from jail after over 50 years and seems so lost and lonely in freedom that he commits suicide, up to the brave sequence where Red tells the parole officers to finally make a decision about his release or "stop wasting his time", while Tim Robbins and Morgan Freeman are brilliant and prove to be one of the most underrated actors of their generation.