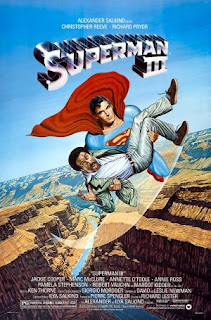 Gus Gorman is an unemployed guy who accidentally discovers a talent for computers. He finds a job in the company run by the rich Webster, attracting his attention when he programs the computer to increase his salary by collecting all the unpayed half cents from the employees. Webster orders him to control the Vulcan weather satellite and destroy the coffe in Colombia, yet Superman shows up and stops the hurricane. At the same time, Clark Kent goes to Smallville for a high school reunion, reuniting with his former love Lana Lang. Webster assembles Kryptonite and gives it to Superman, causing him to become bad. Yet, Superman overcomes his crisis and beats Webster, destroying his supercomputer and teaming up with Gus.

After he deservedly got a lot of praise for "Superman II", director Richard Lester disappointed the critics in part 3: even "Superman III" has humor, irony and a different approach to the one-dimensional super-hero stereotype, but compared to its forerunner, it seems pale, uneven, cheesy and chaotic, ending up almost as patchwork. The infamous Salkind producers, a nightmare for every creative author, once again ruined a lot of potentials, while there is little action and enough humor, but they mostly weren't inspiring or well directed - the best example is the opening title sequence that sets up a whole array of slapstick scenes on the street, but only one gag really ignites, the one where the blond beauty Lorelei is walking down the street and Clark Kent shields her from a pie that could have fallen on her by catapulting it away with his hand - and right into the face of an 'insignificant' man. Still, the bad reputation of the film is unjustified since the story is still good, interesting and original (especially in the scenes where Superman became evil, mischievously straightening the Leaning Tower of Pisa). Also, casting cult comedian Richard Pryor in the film was a stroke of genius: the guy simply steals the show and is the best part of the film, even though some fans lamented how he is "too interesting" and "steals an equal amount of attention" from the title hero. Kudos to the authors for getting him in the team - his appearance is such a surprise it's only comparable to what it could have been if E. Murphy was cast in "Star Trek IV", as it was originally planed.