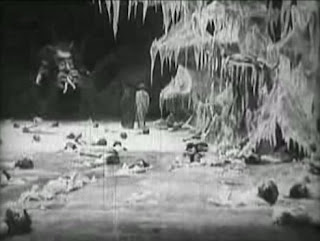 Dante Alighieri is lost in the woods. But the soul of Beatrice sends the Roman poet Virgil to find and guide him. Dante is at first scared, but follows Virgil to the Underworld, descending to 9 circles of Hell. In the first, the Limbo, he meets pagans, including Homer and Ovid. In the second circle, Dante and Virgil meet Francesca da Rimini. Then they go to the circle of gluttons and then to the circle of misers and spendthrifts, passing to the city of Dis thanks to the boat of Phlegyas that sails over the river of dead souls. They enter the sixth circle of the Heretics, with Cavalcanti, circle of the violent, with Pier delle Vigne, and the circle of the fraud and treachery. After they have seen all, Dante and Virgil go back to the sunny surface.

The first feature length film from Italy, "Inferno" caused a sensation back in 1911 when it adapted the first third of Dante Aleghieri's 1321 epic poem "Divine Comedy" and didn't hesitate to use even special effects and surreal set-design rarely seen at the beginning of the history of cinema to cast the viewers under it's spell. Even today, that assignment is accomplished and still holds the test of time since the film is fascinating and hypnotic, a surreal fantasy and allegory about Hell with tricks that make it stand out from the other artifacts of early cinema. In that sense, it's quite a raw film: no close ups, editing or almost any kind of camera movement, just static shots that make it a pure film.

Even though only normal caves are used for the set-design, they seem sufficient to conjure up the surrounding of Hell, while the authors didn't spare with awe, like in the scene that shows Virgil giving dust to the three-headed dog Cerberus - a solid puppet - a descending dragon or the two poets standing on a hill observing hundreds of floating souls in the dark sky. Many of these special effects of the monsters seem surprisingly good even today while the film has a scary mood. In one of these most astonishing scenes, in one circle of Hell a lizard shows up, climbs up a body of a sinner and transforms it into an unrecognizable mess. Since these scenes seem impressive even today, it's not surprising that the audiences were baffled by them back in 1911. Still, it's hard to shake off the impression that Alighieri's story is just a skillful propaganda for the Christian religion: the fact that good people ended up in Limbo just because they were born before Jesus Christ is almost suitable enough to be some absurd joke by Eugene Ionesco, while Muslim viewers may be offended by that fact that Alighieri even placed Mohamed in Hell. Still, leaving all those things aside, this is an impressive film that's a classic for its sheer vision.