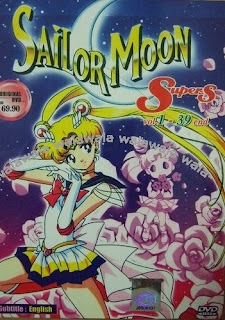 Sailor Moon and the other senshi have to fight with the new enemies, the Dead Moon Circus, that steals people’s dreams in order for Queen Nehelenia to rule the world. At the same time, Chibiusa is visited by the vision of the talking Pegasus, who tells her that he is trapped in the dream. They manage to save Pegasus and the world.

Tied with “Sailor Moon” Super S season there lies an interesting trivia: the Super S manga is considered to be the best season among the fans, while the Super S anime is considered to be the worst. That’s pretty unfair because even though the manga was absolutely fantastic and superior, the anime still has quite a substantial amount of virtues that are so conveniently forgotten, especially in the sharp style that is again very polished and improved compared to the first two seasons. One really has to have the nerve to dismiss such a beautiful style just because of a few bad episodes. If one needs to mention all those great moments episode after episode, then so be it: in no. 132, Mamoru’s colleagues Saori and Kobayashi visit him in his apartment. Saori still has a small crush on Mamoru but won’t admit it, until Kobayashi points out how she always puts lipstick when she visits him, which causes her to blush. No. 140, “Love Those Minis! The Fashionable Senshi”, is fabulous because of the scene where Fisheye becomes fashion designer’s Yushiki Usui inspiration and while posing for a model gets accidentally stabbed by a needle of a tailor woman, becomes furious and rips his clothes off, remaining there with his bare chest even though he always dressed as a woman in all episodes. Not to mention the sweet detail where Usui finds his inspiration for new dresses in Sailor Moon’s outfit. Regarding no. 151: the tadpole shaped lemure that attacks composer Toshiyuki seems as if it came from Fellini's "Satyricon", but the scene where a naked Ami is walking inside the painting of her father and talking with her alter ego Sailor Mercury, is something for the gallery of poetry that causes a short circuit in your brain centre for beauty.

Who can seriously claim that episode “Storm of Love! Minako’s Grand Two-Timing Plan”, where Minako leaves Hawkeye alone with some old lady in the cinema in order to go with Tigereye for a “double date”, isn’t hilarious or that “Sparkling Summer Days! Ami, the Girl in the Ocean Breeze”, where Shingo blushes and leaves the beach because Ami woke up “love feelings for an older girl”, isn’t the sweetest thing? Also, shining episode 148, where Fisheye fell in love with Mamoru, and just stayed sitting on the bench in the rain after he didn’t show any interest, and Usagi shows up and offers him home for comfort, is so beautifully simple it melts you away. How often do you get a chance to see a villain fall in love with his enemy? The Amazon Quartet, though, is a poor replacement for the Trio, and their segment is one of the reasons why this season is on such a poor voice: at least 5 episodes were throw-away material while the too bizarre ideas and embarrassing Lemures were quite questionable. Still, Fisheye is the 2nd best villain in the show while the finale is the 2nd best ending in any “Sailor Moon” season, only behind “Stars”. Also, the complaint that Chibiusa took over the leading role in the season doesn’t hold up, since out of the whole 38 episodes she is the centre in – only 15 of them. The rape parable for the violent dream mirror penetration by the villains is really sneaky, some images seem as if they are made by Salvador Dali and Rene Margrite in a romantic version, while the authors deserve to be acclaimed for, despite all flaws, trying to craft something so dreamy and experimental.

It is one of the greatest animes I have ever seen. It was one of my favorite shows as a kid. The music is immense. Really a great show for all time. So Guys Download Sailor Moon Free from here and enjoy it at any time!!!

This post I occasionally came across reminded me of my childhood - I really loved Sailor Moon, and I suddenly felt the desire to watch it again... well, with my wma to mp3 I will be able to get it onto my cell phone and watch.