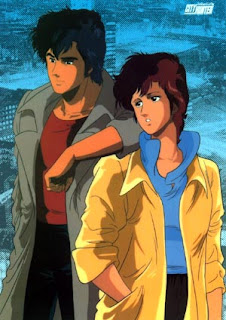 Ryo Saeba is a private detective and a womanizer in one, alas a real klutz. Still, the assignments he gets from his female-clients are often complex and demand him to fight against criminals, which he does thanks to the help of his partner. There are a lot of assignments: Natsumi lost her sister who was shot in the middle of the street so Ryo captures the perpetrators; scientist Ritsuko discovered a bacteria that can make someone impotent so Ryo protects her from gangsters who want to kidnap her; Megumi hires Ryo who shoots a boxer who killed her husband...When his partner gets killed, he is replaced by his sister Kaori. Even though they argue a lot, Kaori is always jealous of his clients and finds a soft spot for him.

In the Universe of dark-grey anime creations, funny-nostalgic 80s anime "City Hunter" brings a resonance and a revision in it's genre, inspiring even a live action movie adaptation in '93. Some don't appreciate this series, but it has to be given credit and revalorisation for it's sheer amount of crazy ideas: the hero Ryo is namely a real parody of detectives from noir movies and accepts only female clients. He is so wacky that he even has a puzzle of a naked woman whose intimates parts he already in advance prepared to "assemble" while in one episode his client is scientist Ristuko who discovered a bacteria that can make people impotent, so he offers himself to "show her" how he is immune! And the sequence in which a tall assassin in a gigantic truck is chasing after Ryo and his client and by the way demolishes the whole studio is epically hilarious! The serious part of the story (when his partner dies) is weaker since the plot differs from episode to episode, while the romance with his new partner, the spoiled Kaori, is sadly avoided, whereas the trademark joke where she hits him with a 100 ton hammer whenever he is naughty becomes tiresome after a while. It's a flawed and average, but still satisfying piece of cult anime.