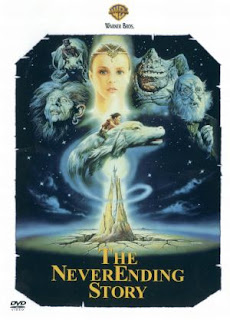 The young boy Sebastian lives with his single father and is bullied by some kids. One day, he finds a book called "The Neverending Story" in a library. In it, one Indian boy, Atreyu, gets the assignment to save the land Fantasia from "The Nothing", a dark that keeps consuming it ever since humans started forgetting about their dreams. During his trip across a swamp, Atreyu meets a giant turtle and a flying white luckdragon. But the dark keeps swallowing more and more land. Bastian is so fascinated by the story that he figures only he can save Fantasia. Bastian gives the Empress a new name and saves Fantasia, flying away on the luckdragon.

With a 27 million $ budget that made it the most expensive movie outside the US and USSR back in that time, gentle German fantasy "The NeverEnding Story" covers only the first half of the the book with the same title by Michael Ende, which is why the author was so angry he ordered his name removedd from the opening credits, and some of his complaints are valid since the story as it is doesn't sufficiently exploit the opulent imagination of the world to enchant the viewers to the fullest. But to a certain degree, it is hard to deny the movie's appeal since it touched some nerve of the audience which is why it is remembered even today. It has something to do with "The Nothing" that represents our grey reality and depression that slowly destroys Fantasia, a symbol for our childhood dreams that are getting forgotten when we grow up. It is not clear when Sebastian blends in with the story he is reading in the book, but that happens only a few minutes before the end anyway, which is a serious drawback that was somewhat "compensated" in the sequel that followed the second part of the book, but again unfaithfully. Also, the movie as a whole seems lifeless. Still, the first half works wonderfully and abounds with dreamy scenes, from the sparkling Ivory Tower, through the exotic set design up to Atreyu traveling on a horse across the landscapes, and is elegantly directed by Wolfgang Petersen. Except for the banal dramaturgy, it's ironic to note that the most wooden ingredientss of the movie turned out to be precisely the creatures of fantasy (the white dragon) and the most fantastic the final, magical song by Limahl, "The NeverEnding Story".