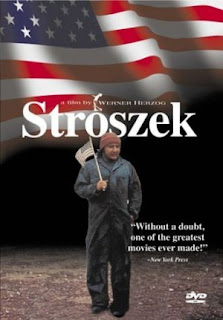 In Berlin, the peculiar Bruno Stroszek is released from prison. When the guard asks him about his name, he replies with: "Have you been taking a too warm bath? You know my name now for 2 and a half years!" On free foot, Bruno immediately orders a beer and makes friends with prostitute Eva and some old man. He can't find a job as a street musician and is constantly terrorized by Eva's "friends". The old man has a nephew in the US, so he, Eva and Bruno decide to immigrate to that country. Bruno becomes an auto mechanic, Eva an waitress, but they again have no money. Eva flees, the bank takes over their house. Bruno and the old man rob a barber. The police arrests the old man, while Bruno commits suicide.

Bitter social drama "Stroszek", that mercilessly and directly shows and critiques the harsh climate in the US towards the immigrants, is a truly excellent film. The title hero is played by the mentally handicapped Bruno S. who did his job wonderfully because he delivers his every word with dignity. The shrill touch is established already in the beginning: Bruno says farewell to all his friends in jail - one of them gives him a present, a paper ship so small that is lifted with tweezers, while the other one farts before fire, creating a flame (a bizarre scene that was later on "copied" in numerous comedy films, like in some directed by the Farrelly brothers). The prison warden warns Bruno not touch alcohol anymore, making him bow, then stand up and say: "I promise! By my Hungarian word!" Of course, the minute he leaves prison, he goes to a bar and orders some beer, in one of the numerous comical moments of the film. The dear hero and his two friends, a prostitute and an old man, end up tragically, but director Werner Herzog made the story quirky thanks to dialogs ("Who cries, pisses less!") and situations (farmers driving tractors with guns in their hands), crafting a fascinating little minimalistic film.