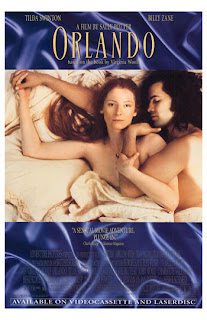 1600. In England, the young Orlando tells a poem about youth in front of Queen Elizabeth I. She grants him a large estate and orders him never to age. During winter, Orlando falls in love with Sasha, the daughter of a Russian diplomat, but she abandons him...1650. Orlando decides to finance poet Greene, but gets disappointed by his work...1700. Orlando is an ambassador in some country in the Middle East. After a man gets killed, Orlando wakes up one morning as a woman...1750. Orlando rejects an offer for marriage...1850. Orlando meets Shelmerdine, who fell from his horse, and spends a passionate night with him...A pregnant Orlando walks through World War battlefield...90s. Orlando hands over a manuscript for her novel and rides away with her daughter.

Art-drama "Orlando" is one of the strangest essays about transvestism and gay love ever filmed. By presenting a man, Orlando, who becomes a woman half way into the film (he/she awakes, looks herself in the mirror and and talks directly into the camera: "The same person. No difference. Just a different gender"), the story tried to reflect the essence of that state that is reflected across different Centuries, yet despite a solid direction by Sally Potter, "Orlando" is strangely unaffecting, pale and deprived of any way to communicate with the viewers. For all of it's good intentions, it's purely a film for it's own sake, or for some other sake unknown and alien to us. The 7 episodes from Orlando's life all flow smoothly, they are all well crafted, yet they have no meaning as a whole or for themself. Here and there a few intriguing scenes show up that ignite the viewers' interest, like the shot of a ship captured by ice in the middle of the frozen sea, yet the flame quickly gets extinguished since the story fails to incorporate a purpose that is sensed into it. It's a film that's so bizarre that you're surprised you don't feel anything. Though cult actress Tilda Swinton is very good as the androgynous title hero/heroine since the role seems to fit her hermetic talent. The make up won a BAFTA.