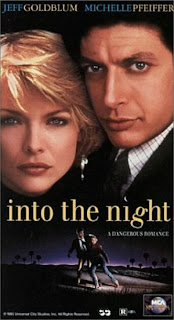 Ed Oakin suffers from insomnia ever since the summer of '80, his job as a telecommunication engineer doesn't offer him any motivation while his marriage is dull, so one night he starts aimlessly driving in his car until he parks in a L.A. parking lot. Suddenly, diamond smuggler Diana enters his car and tells him to drive because she is chased by a bunch of Iranian agents, the SAVAK's. Going through numerous adventures, Diana explains Ed that she was framed and that she didn't steal the diamonds. One of the SAVAKs takes her hostage at the airport, but commits suicide. At the end of the adventure, Ed falls asleep and Diana asks him for a ride.

Even though it was a commercial failure, humorous crime flick "Into the Night" later on gained cult status. Director and actor of the film John Landis (he plays the mute SAVAK) achieved an unusual atmosphere, but didn't avoid the occasionally rough, lax and unfunny moments of the wacky screenplay by Ron Koslow or reach the level of his earlier excellent comedies, while the small cameo appearances by numerous directors (Paul Mazursky, Lawrence Kasdan, Jack Arnold, Amy Heckerling...) give the story a neat inside charm. As some critics rightfully observed, the movie does contain an obvious degree of flaws, thus the worst parts are the mildly directed car chase scenes and unspontanoeus characters, but the unusual juggling act between a straight forward comedy and a straight forward thriller does have style, which is why some inspired moments are very successful: for instance, in the scene where the scared Ed and Diana are nervously running away from the killers, ditch them but all of a sudden the elevator doors open and an angry dog barks at them scaring them even more, while it's owner just says: "Don't worry! It's a good dog!" or when the criminals keep Ed in the car but Diana shows up with a police officer and tells him those are her drivers so the bad guys have to play along her game and release Ed.